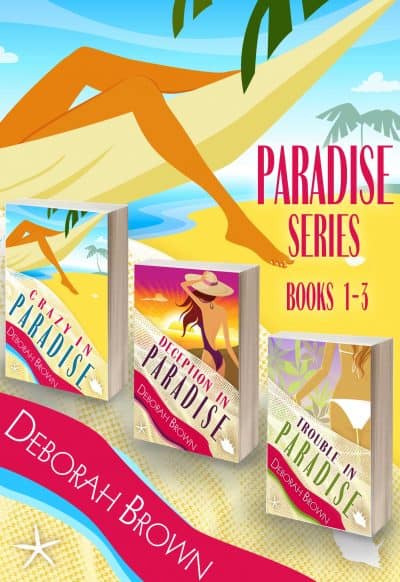 Welcome to Tarpon Cove. Madison Westin has inherited her aunt’s beachfront motel in the Florida Keys. Trouble is, she’s also inherited a slew of colorful tenant’s—drunks, ex-cons, and fugitives.

Dying in the middle of the summer in the Florida Keys is sweaty business.

Crazy in Paradise
Welcome to Tarpon Cove. Madison Westin has inherited her aunt’s beachfront motel in the Florida Keys. Trouble is she’s also inherited a slew of colorful tenant’s—drunks, ex-cons, and fugitives.

Only one problem: First, she has to wrestle control from a conniving lawyer and shady motel manager. With the help of her new best friend, whose motto is never leave home without your Glock, they dive into a world of blackmail, murder, and drugs.

Deception in Paradise
Madison Westin is back!! The Florida Keys are hotter than ever.

With Madison’s never-say-no style she’s smarter and packing an attitude not to mention her Glock.

This time, trouble rolls into Tarpon Cove in the form of Madison’s ex-husband, Jackson Devereaux, whom she hoped to never see again. His arrival brings unparalleled chaos and an uninvited corpse.

Teaming up with her hot friend, Fab, the two women go from chasing the usual cast of misfits and weirdos to hunting down a murderer. The action turns deadly serious when they stir up a nasty enemy as they try to stay one-step ahead in a game of cat and mouse that threatens their lives.

Trouble in Paradise
What is big news in small town Tarpon Cove? An accidental drowning or perhaps a ruthless murder? When a dead fisherman rolls up on shore, Madison cannot resist jumping into her new role as Private Investigator. But she soon discovers the people in The Cove who normally gossip about everybody’s business are unusually tight-lipped.
The bad tenant radar still not working, the cottages continue to be full of riffraff. Madison gets arrested, shot at, and outsmarted. She teams up with her best friend – the Glock carrying Fabiana. Together they take on cases no other investigators would ever touch!