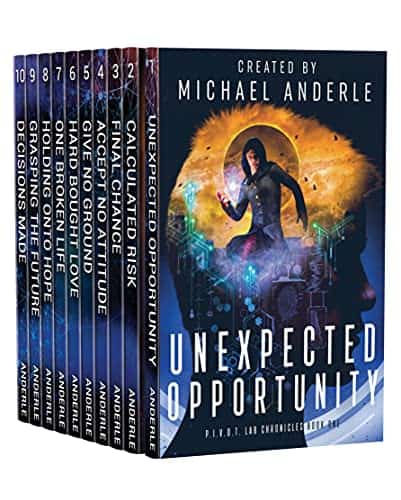 A young man pushed to go on a date that went horribly wrong. An older woman dying from cancer. A man trying to recover from a mountain climbing accident. A young woman who fears sleeping. What ties them together?

A young man pushed to go on a date that went horribly wrong. An older woman dying from cancer. A man trying to recover from a mountain climbing accident. A young woman who fears sleeping. What ties them together?

They each enter into a virtual fantasy world in the hopes of either being healed or providing escape from what’s killing them while providing valuable data to doctors.

Meanwhile the game’s AI is learning, growing and is on the brink of discovery. The government is on the hunt for the secret lab and the people running it.

Who will end up healed, hidden, or found?

Get the 10-book boxed set to immerse yourself in the world of P.I.V.O.T. Labs.

Would you be willing to chance dying to come out of a coma? Would you do the same if it was your son’s life?

Mary and Senator Tad Williams pushed their son Justin to go on a date that went horribly wrong. Now, they try to figure out a way to help their son out of a coma. At almost $5,000 a day for ICU expenses, their insurance options are running out.

Amber, Nick, and Jacob built a new immersive game system for the future. The only problem is, at $800 a day, no one can afford it.

Dr. Dubois wrote a paper about how you might help a person out of a coma, but it was crushed under the might of the medical lobbyists on Capitol Hill.

Now, the three groups need each other to save a life, fight the establishment, and help a young man in need.

The only challenge is, Justin can die in real life if he dies in the game.

Will he wake up from his coma? Will lobbyists crush the principled senator who needs to talk to his son one more time?

And can Justin possibly survive inside a fantasy world built in his own mind, where pain is real?

It isn’t just the future of humanity at stake, it’s Justin’s life, too.