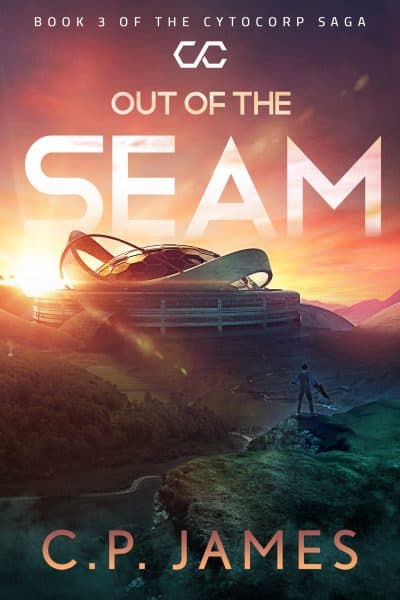 Out of the Seam: A Dystopian Adventure (The Cytocorp Saga Book 3)

As Cytocorp’s dark vision for the future draws near, a group of rebels makes its final, desperate play to save the world from enslavement.

As the world descends into chaos, a fractured resistance makes its final, desperate play to stop Cytocorp and free the Domes.

Having landed a critical blow against Cytocorp, Novi, Owen, and the rest of the Phage hope to break the Company’s power once and for all. Their ambitious plan would prevent the Synthiont from taking over the world and potentially spur the Northern Cities to rise up. But morale is flagging and so is their faith in the plan—not least of which because it’s borderline insane.

Not only must they break into a heavily guarded data pipeline, but Novi must risk everything to sneak into the Reach, contact the Globalist resistance, and get her adoptive brother out of the city—all without getting herself or her team killed.

When a surprise message from distant allies alerts the Phage to a mysterious facility, they believe it may be the final key to destroying Cytocorp once and for all. With a new leader in place, they prepare to set everything in motion.

Meanwhile, Cytocorp’s endgame is nearly at hand. World leaders, desperate for answers only the Company can provide, converge on Pacifica for a summit that could alter the course of human history. Ethical lines are drawn as Chief Executive Sharpe outlines the steep price of saving the world.

As chaos erupts on the streets of Pacifica and the Phage squares off against Cytocorp, the fate of the civilized world hangs in the balance. Will Dome Six finally be avenged or is the Company still one step ahead?

Read the thrilling conclusion to The Cytocorp Saga today!