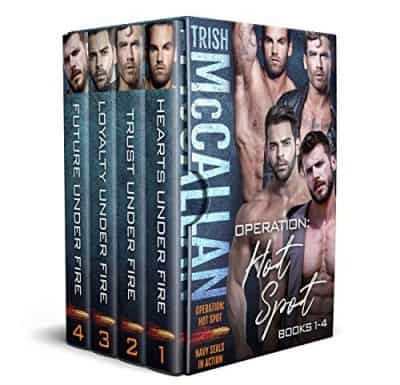 Hearts Under Fire
When the woman Aiden Winchester has spent three long years lusting after indicates she’s open to a short term, down-and-dirty fling, it’s full steam ahead and all ammunition on deck. The only man Demi Barnes will take to bed—or on the kitchen table or up against the wall—is him. And it sure won’t be a short term arrangement.

Trust Under Fire
Ask Navy SEAL Lucas Trammel to take out an al-Shabaab enclave full of terrorists and he’s your guy. But love? Yeah, clearing a minefield is less dangerous. From day one, Emma Janssen was an unwelcome temptation. Those soft curves, her thousand-watt smile…Did he regret that weekend? Hell No. But black ops and civilians don’t mix. He walked away for her own good. Now her life is in danger and she needs him. And this time—after the bad guys are down—he’s not walking away.

Loyalty Under Fire
Former Navy SEAL Dante (Rio) Addario has an Achilles heel. A big one. Rebecca Blaine. An old flame he’d left firmly in the past. Becca didn’t look like trouble, but beneath that perfect packaging was sweet chaos—a drama queen in six-inch heels. The kind of woman even Navy SEALS ran from. Now she’s back, with a killer on her heels, and Rio is thrust into a chilling game of cat and mouse where one misstep will get them killed.

Future Under Fire
Navy SEAL Brett (Tag) Taggart went wheels up with a ring in his pocket and a proposal on his mind. He returns to find the woman he loves engaged to another man . . . a fellow SEAL. When Sarah is kidnapped hours before her wedding, Tag’s protective instincts roar to life. He will find her. He will rescue her . . . he will protect her . . . whether she’s his or not. But just when it looks like he has a second chance with her, the fallout from Sarah’s rescue exposes all her secrets—secrets Tag can’t forgive or forget.

Buy or download now and find out why military romantic suspense lovers are calling Operation: Hot Spot a “one-click series that grabs your attention on the first page and keep you reading late into the night.”