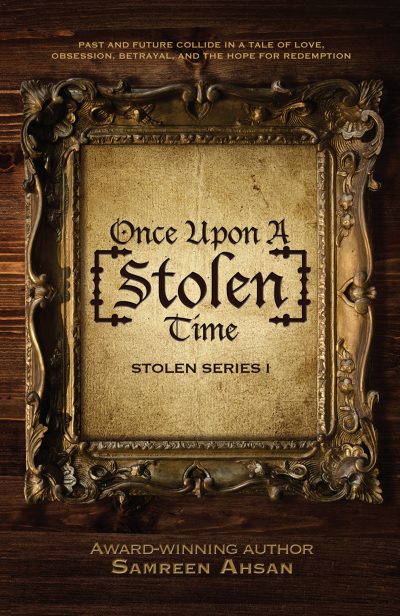 Once Upon A [Stolen] Time ([Stolen] Series Book 1)

From the twenty-first century London, a modern-day travel blogger Myra meets a reclusive prince Edward from the fifteenth century England, where past and future collide in a tale of love, obsession, betrayal, and the hope for redemption.

2015 . . .
All her life, Myra Farrow has been obsessed with medieval castles—and the kings and princes who once inhabited them. Now, wealthy videogame designer Steve Bernard wants her to model for a princess character in his new game. Myra can’t resist his offer, especially when she learns that Steve plans to film inside the mysterious Hue Castle—a cursed, barren, colorless place forbidden to visitors for centuries. But unknown to Myra, her soul is bound to Hue Castle by blood and sorcery. When she enters its doors, she awakens dark powers that will reach through time—stealing her past, torturing her present, and rewriting her future.

1415 . . .
Edward Hue, the last of the Hue royal bloodline, has never stood in the sunshine or held a living flower. Cursed from birth to live in darkness and bring death to all he touches, he is at the mercy of his cruel, tyrannical father, who will not rest until he shatters Edward’s soul and makes his son into a diabolical copy of himself. Edward’s one hope is the mysterious woman who haunts his dreams—who will either break his curse and bring him out of the darkness, or destroy him utterly.

For Myra and Edward past and future collide in a tale of love, obsession, betrayal, and the hope for redemption.

A modern-day retelling of the Beauty and the Beast.