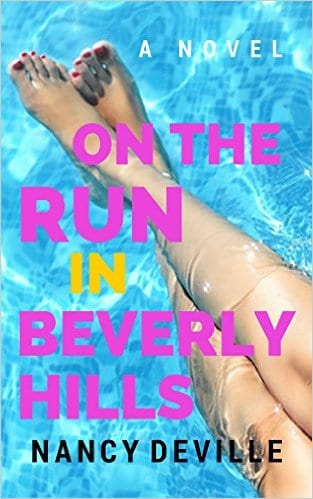 On the Run in Beverly Hills

When three lifelong BFFs suddenly find themselves husbandless, homeless, and broke, they use their wits to dig themselves out. But their efforts turn them into fugitives and they are forced into hiding . . . falling in love along the way.

The extremes women go to look good may seem insane, but in Los Angeles it’s merely the business of being drop-dead gorgeous. Among the beauty fanatics are three 60-year-old best friends: Fifi a richer-than-God Beverly Hills housewife; Lily, a celebrity herbalist who somehow got waylaid in the 60s; and Olive, a modern type of “sexy old maid” journalist.

Just when they thought they could relax and enjoy, their lives are simultaneously broadsided. Fifi’s husband drops dead of a heart attack, leaving her bankrupt; Lily is arrested for dealing marijuana because of her lowlife husband, and while she’s locked up her house burns down; and Olive learns that she has the BRCA1 gene and needs a bilateral mastectomy, she’s being evicted, and her long-time editor at the Rolling Stone gives her one last chance to write a smash hit story or her career is over.

When Lily is released, the homeless, husbandless, broke friends reconnoiter and sob their eyes out. Lily comes to the rescue by formulating a cream that miraculously erases their post-cry under eye bags, the active ingredient being CBD from, yes, marijuana.

Soon the three become fugitives, wanted by the FBI. They hole up at an illegal grow in the Angeles National Forest where they hope to acquire enough weed to go into mass production on the cream. It’s a desperate attempt to garner the support of the vain women of LA, who they hope will vote for an initiative to legalize recreational marijuana, which will save both the three friends and their business.

All of this and the three have managed to fall in love along the way.

But Laine Marin is insatiable, and has them tracked down and arrested. Now they have to figure out what to do next.