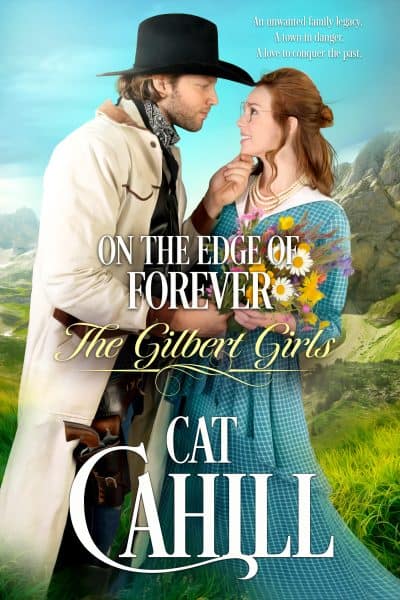 On the Edge of Forever (The Gilbert Girls Book 6)

An unwanted family legacy. A town in danger. A love to conquer the past.

Edie Dutton left Kansas with nothing but a few pieces of clothing, a handful of stolen bills, and a forged letter of reference. Since then, she’s found a home as a Gilbert Girl at the Crest Stone Hotel. Even despite her transgression at the hotel last fall, she has a second chance to live the life she wants. She could live happily in this valley forever, as long as she has a garden and some good books to read. But Edie Dutton is not her real name, and arriving along with all the newcomers to town comes word that her past may be on its way to put her future in jeopardy.

Fremont County Deputy James Wright has landed the perfect opportunity—keep peace in the growing town of Crest Stone. If he succeeds, he’ll set himself up nicely to be elected town marshal. More than anything, he wants to do his uncle’s memory justice. But unlike his uncle, he’ll never let himself be distracted by a woman. That proves to be difficult when he meets the kind and unassuming Edie Dutton. Not only does she manage to cure the headaches that have plagued James his entire life, she reminds him of home. And she makes it awfully hard to focus on the work he’s supposed to be doing in Crest Stone.

It isn’t long before trouble moves closer to the valley. The rumor is that opposing gangs of outlaws from Kansas are behind it, stoking Edie’s worst fear. She knows her new life—and her growing relationship with James—are in danger. But when the outlaws escalate their crimes, James’s life hangs in the balance. Edie must choose whether to forfeit everything she has, including James himself, in order to save his life. And when James discovers her true identity, he’ll have to decide if love is worth giving up everything he’s worked for.

On the Edge of Forever is the sixth book in the Gilbert Girls series. Like all of Cat’s books, this sweet and clean historical romance will warm your heart and fill you with hope.