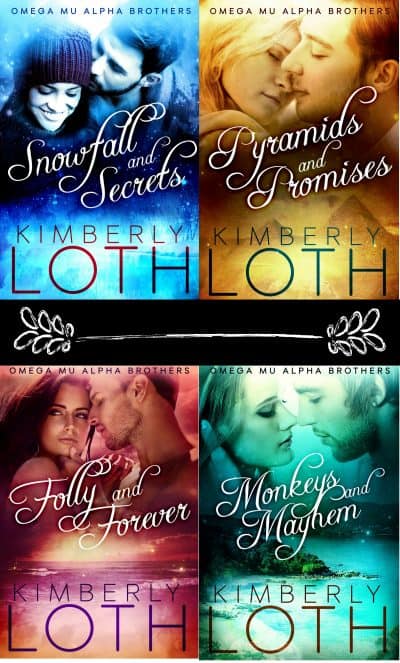 Four stand-alone sweet romance stories now available in a boxed set! Each book is set in a different exotic location. Over 200 reviews on the individual books!

Tess escapes from Florida with a secret as big as Miami. She needs to find someplace to lay low and hide from her overbearing family. Mackinac Island, Michigan, should be the perfect place to hide out. However, her timing is a little off: it’s the dead of winter and she’s never been in temperatures below fifty degrees. Just her luck, her landlord, Lukas, is as hot as the sun. He’s also moody and hiding secrets. Which suits Tess fine. A man is the last complication she needs. But when Michigan blizzard leaves them trapped in the same house together, things heat up, fast. Tess finds herself falling for Lukas, in spite of the secrets that could ruin everything before it even begins.

Jessica Erickson’s never been one to run from her problems, but she has no choice this time. The only way to escape her cheating, mentally abusive ex-husband is to flee her beloved second home in Russia for the dusty, hot Cairo desert. It’s the absolute last place in the world she would actually want to go, but the only option available to her. Unfortunately, the sand isn’t the camouflage she hoped it was and her stalker ex is still able to track her down.

Egypt isn’t as terrible as she had initially believed, though. She lucks upon a chance meeting with Conner Locke, who’s as hot as the Sahara and determined to show her the beauty in what she finds ugly. Not just in Cairo, but in herself. As a therapist, she knows that rebound relationships never last, but she can’t stop from tumbling head over heels for him. But Conner’s own demons might shred their new happiness before either one of them get the chance to believe it’s truly real.

Bethany McAlister loves that house more than life itself and will do anything to keep it. Even if she can’t afford the taxes on it. When a notice arrives informing her that her house is about to go to auction, she desperately takes on a roommate, but gets a surprise when the dead sexy Jamie Green shows up on her doorstep to take her spare room. Jamie brings not only much needed cash but also more problems than Bethany cares to take on. But then he presents a proposal that can fix both their problems—get married. Will she say yes and risk her heart or no and risk losing her home that means so much to her?

Anna’s always done what’s expected of her. When her grandfather passes away and she no longer has to be his caretaker, she applies to the local university. To celebrate her acceptance, she and her best friend head out to their favorite bar to celebrate. There she meets Hayden, who takes her home for one unforgettable night before he heads to Thailand on a doctor exchange.

Hayden loves his work doing reconstruction work in the local hospital, but when a reminder of his damaging past shows up, he heads thousands of miles away to escape. He doesn’t really want to practice in a plastic surgery clinic again, but it’s a small price to pay for peace of mind.

What he didn’t expect was for Anna, who he’d only spent one night with, to show up on his porch asking for a place to stay. He can’t turn her away in a foreign country, especially after she confides that instead of going to school, she spent her entire savings on a plane ticket to come see him.