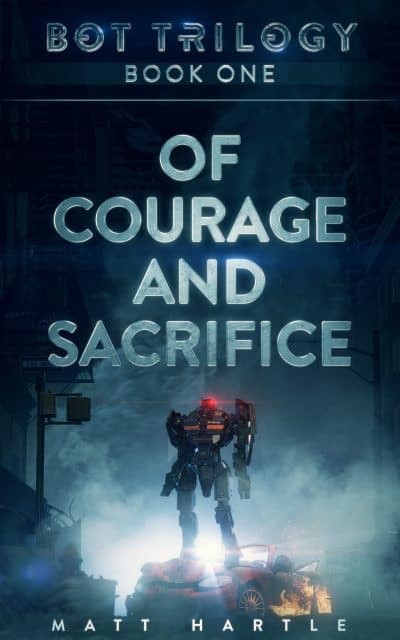 80’s technology pitted against mega corporations, A.I., and military tech. How will Adam and his friends survive? Robot armies are over-running societies with one objective: pacification and submission. If they are to survive, they will have to work together as a team!

The world is a deeply troubled place—years of crippling unemployment, a collapsed economy, and rampant crime have left people feeling desperate, but Adam Wesley and his friends don’t care about that. They’ve finished classes for the final time and are looking forward to a carefree summer of parties, camping, and enjoying their first authentic tastes of freedom after high school!

Fate has another plan for them.

On their inaugural outing of the summer, the friends encounter a reconnaissance robot, or “bot” as they are known—with disastrous results. One of the friends is grievously wounded in the exchange, kicking off a race against time to get help before it’s too late.

When the friends finally make it back to the city, they find the streets are overrun with bots; martial law is in effect. People are being loaded onto buses and taken to transition camps. Anyone caught in the open is pacified and detained; not all will survive. Adam and his friends go underground, taking up with Skip, a brilliant but eccentric hacker. Skip has built a tech hideout called The Nest—a faraday cage suspended in the maintenance tunnels beneath the city. Using antiquated technology—dial-up modems and BBSs—the friends begin to organize. Together, they will fight desperately to survive, unintentionally planting the seeds of a resistance that will become more important than any of them can imagine.

Fans of the Hunger Games series by Suzanne Collins and Robopocalypse by Daniel H. Wilson will love Of Courage and Sacrifice!