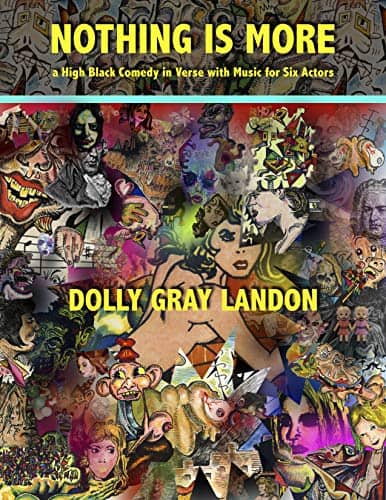 Nothing Is More: a High Black Comedy in Verse with Music for Six Actors

“This pun-filled, linguistic labyrinth pokes fun at the elitism of the art world and academia while still gracefully tackling large and complex themes in philosophy and aesthetics.” —Online Book Club

Landon’s subversively hilarious six-hour play is a high black comedy in doggerel verse with music for six fiercely opinionated and outspoken characters with radically different perverspectives apropos of what constitutes “art,” ranging from the commercially pragmatic to the philosophically effete. The opinions expressed are in no ways frivolous but evolve into transcendental matters verging on Life and Death. The setting is Pimpleton State Luniversity, which offers a post-doctoral degree called a “stool” for scholars specializing in absurdly arcane areas of research (e.g., Primaeval Linguistics, Feline Transgender Studies, and Astromusicology). Amongst the stool program’s leading contenders is a bombastically pretentious charlatan named Phangbang Bonation, who is the prolific progenitor of a post-postmodernist aesthetic known as “Nadaism,” which espouses the submicrominimalist credo that producing zilch (i.e., nothing at all) is a legitimate form of artistic expression. This deranged ideology draws a huge cult following amongst critics of all artistic genres and earns Phangbang untold wealth in the sales (through auctions) of various non-opuses from his Nadaistic oeuvre.

Two of his fellow stool candidates—Pelvin Penisovich and Purvel Schlignatz—are so violently repelled by Phangbang’s grandiose pretensions (especially subsequent to his diverting the amorous attentions of their main squeezes exclusively to himself), that they spare no effort in forging an elaborate scheme to expose him for the cunning impostor they adamantly believe him to be in the hopes of not only irrevocably invalidating him and his cockamamie ideas about art but also of obliterating him and his Nadaistic movement from the face of the earth.

But nothing turns out the way Pelvin and Purvel envisioned it ought to have, as they learn, to their utmost dismay, that they have unwittingly opened a whole new (and even more appalling) Pandora’s box of depraved theoretical dogmas as to what constitutes an authentic form of creative expression. Thus, their foiled attempt to subvert what they perceive as the unholy aesthetic crusade of their rodomont adversary ends up backfiring upon them in the form of a new post-postmodernist school of thought that blindly enthused critics coin as “revisitationism,” which engenders in its turn the unleashing of a plague of criticastically acclaimed, up-to-the-minute, pseudo-artistic horrorshows all across the land.

The following caveat should not be construed as a spoiler alert but rather as a friendly heads-up to prospective explorers of this text. Readers are duly advised of the very palpable likelihood that they will be rendered speechless—even dumb—when they find out what the aforementioned revolutionary artistic innovation embodies. Be forewarned: This play is not intended for weak-kneed invertebrates or the squeamish of heart.