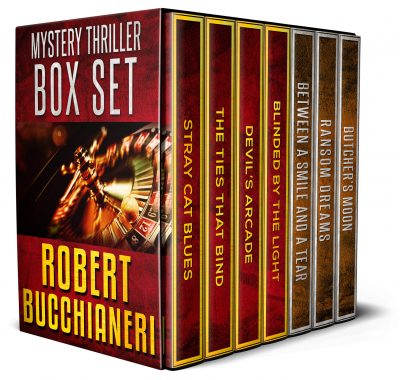 A big box set including the first four novels in the Max Plank mystery series, plus three standalone thrillers, with over 600 reviews on the individual books! Get these seven thrilling novels of suspense, with twists and turns to keep you guessing until the very last page.

A Big Box Set including the first four novels in the Max Plank mystery series plus three standalone thrillers!

Stray Cat Blues
A missing big sister. A little girl all alone. Time is running out. Can Max Plank, San Francisco’s P.I. extraordinaire, untangle the mystery before all is lost?

The Ties That Bind
A wealthy San Francisco socialite with a mean streak. A torch singer enmeshed in a sordid love triangle. A brother and sister with a strange bond. Nothing adds up until Max Plank starts snooping, slowly uncovering the secrets and lies, the rot at the heart of a prominent family’s history.

Devil’s Arcade
Max Plank knew better than to get involved with his archrival, the city’s most notorious crime lord. But when he does, he finds himself on the run, both suspect and prey, and fighting for his life.

Blinded by the Light
A wildly charismatic cult leader. An enraptured young woman. A series of mysterious deaths. Max stumbles into the haunts of an enigmatic cult shielded by celebrity and vast wealth.

Between a Smile and a Tear
A blackmailing stripper. A self-help preaching hit man. A gangster with a penchant for leeches. The streets of San Francisco have never been so twisty as Jack Waters struggles with powerful and mysterious forces trying to destroy his family, his sanity, andhis life.

Ransom Dreams
What motivates a sociopath? Elaine Burnett must find out or die.

One innocent act sets off a cascade of events that will turn her life upside down and threaten it, as well as that of her lover, psychologist Alan Everson. As Walker relentlessly stalks the couple, they struggle to solve the mystery of what is driving their tormentor before he destroys their love and their lives.

Acapella Blues
Sam Ravello, a singer-songwriter living on Cape Cod, tries to help a young Romanian woman and her little boy and becomes entangled in a sinister plot involving corruption, blackmail, and a violent criminal underworld. The mystery Sam solves is sadder than any song he’s ever written, a dirge about innocence forever lost and the extremes of love betrayed.

Seven thrilling novels of suspense in one amazing box set with twists and turns to keep you guessing until the very last page.

Pick up your copy today!