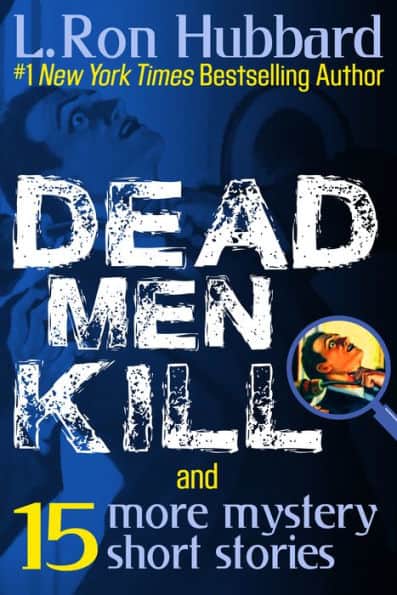 Dead Men Kill and 15 more (Stories From the Golden Age)

“What I am writing is really psychological fantasies, on the order of L. Ron Hubbard’s” —Phillip K. Dick

“A hero of the classic adventure mold . . . tough and rugged, and has a strong sense of honor.” —The Strand

This Collection includes: International Book Awards Winner: Dead Men Kill, Publisher’s Weekly Award Winner: Spy Killer, International Book Awards Finalist: Hurricane as well as False Cargo, Cargo of Coffins, Killer’s Law, The Carnival of Death, Mouthpiece, Brass Keys to Murder and The Chee-Chalker and more—16 short stories in all. For a sense of the mystery ahead, here is a glimpse of 5 stories in the collection:

Spy Killer
Falsely accused and under the gun, Reid jumps ship and vanishes into Shanghai—only to get caught in a web of intrigue, betrayal and murder. In a world where nothing is what it seems and everything is for sale, he’s soon out of his depth, drawn into a spy game in which the winner takes all . . . and the loser takes a knife to the back.

Carnival of Death
Detective Clark is deep undercover at Shreve’s Mammoth Carnival, when he discovers first one and then another headless body. While others believe the gruesome murders are solved after four tribal headhunters working for the show suddenly disappear, Bob Clark suspects someone else is the real killer. When he finds himself seized by the very same headhunters, Clark sincerely hopes his hunch is right, since the point of a very sharp knife is aimed at his neck!

False Cargo
Going undercover and posing as ruthless killer Spike O’Brien, Investigator Calloway quickly discovers that on the ship nothing is what it seems, and no one can be trusted. With so much insurance money at stake, and the whole crew apparently in on the scam, this could end up being a voyage to the bottom of the sea . . . Especially when the real Spike O’Brien arrives.

Brass Keys to Murder
Accused of murdering his father, Steve Craig must discover the truth before being caught by the police or the real murderers.  He follows a trail of smoke and mirrors and sudden violence to the Brass Keys to Murder. With them, Steve will seek to unlock the terrible truth behind his father’s death . . . and an astonishing secret that will change his life—and that of the woman he loves—forever.

When writing mysteries, Hubbard immersed himself in the salient subject matter—studying both forensic science and criminal investigation. He interviewed a wide spectrum of law enforcement officials, federal investigators and even served as a Special Officer with the Los Angeles Police Department creating an authentic foundation for his detective fiction. So while his readers might remain in the dark until the final revelation, enjoying every twist and turn along the way, writing a mystery was never a mystery to Hubbard himself.