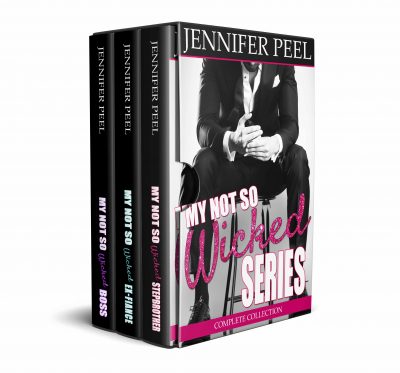 My Not So Wicked Series: Complete Collection

Loveless is more than a name, it’s a curse.

My Not So Wicked Stepbrother
Loveless is more than a name, it’s a curse.

I, Emma Loveless, have a destiny. It’s not the greatest of destinies, but when you have a name like Loveless, what can you do? I’m cursed to always be the friend, never the girlfriend. Unless you count my love affair with Duncan Hines, Dr. Pepper, and the ever-lovable Pillsbury Doughboy. They’ve seen me through it all, but a girl needs more than refined sugar to curl up to every night. It doesn’t help that I have a meddling, albeit wonderful, mother who can’t help playing matchmaker. Thanks to her, I can say I’ve been on a date with a felon. Now she swears she’s found the one for me, her new optometrist, Dr. Sawyer King. Meanwhile, I’m preparing for the inevitable restraining order. That is, until I meet the sexy doctor and have to admit my mother is right–love at first sight does exist.

Unfortunately, my last name means business. Not only do I find myself in the friend zone, but also the twilight zone. Only in my world would Mr. Right turn into my stepbrother. To top it off, he brings with him a wicked stepmother who will do anything to keep us apart. Despite all this my heart—or is that my mom?—keeps telling me Sawyer is the one. But what if true love isn’t strong enough to interfere with my destiny? It’ll be me and the Doughboy . . . for eternity.

My Not So Wicked Ex-Fiancé
He rocked her world. She wrecked his. Now their worlds are colliding again.

Expensive schools and etiquette classes never prepared Shelby Duchane for Ryder Prescott. He taught her more about life in his hay field classroom beneath a blanket of stars than anyone. Under that Georgia sky, she pledged forever to the farm boy with soul-melting chocolate brown eyes, even though it meant forfeiting her large inheritance. She couldn’t wait to clip coupons and buy clothes off the sales rack until death do they part. But then she receives some photos of her intended with someone she had not intended. Brokenhearted, Shelby flees her hometown for Colorado without bothering to say goodbye to her cheating ex-fiancé.

A year later and wiser, Shelby’s doing her best to move on while running her boutique in Carrington Cove, when Ryder shows up and challenges all she thought she knew. Perhaps he wasn’t the wicked ex-fiancé she believed him to be after all. But will Ryder be able to swallow his pride enough to see why she was so persuaded? Will he realize before it’s too late that the only way to heal his own broken heart is to mend Shelby’s?

My Not So Wicked Boss
Love knows no contract.

Aspen Parker’s life can be summed up in one word. Unexpected. For instance, she never expected to become a mother at twenty. Her divorce at twenty-one really threw her off. She certainly didn’t see losing her promotion at the bank to that weasel Stephen. And she most definitely didn’t see Miles Wickham, better known as Taron Taylor—international bestselling author, the man whose words have captivated her—offering her a job to be his nephew’s nanny.

But there’s a caveat to accepting the position; she must sign a contract agreeing to no romantic entanglements between her and the debonair Brit. Aspen doesn’t expect this to be an issue, seeing as she’s not particularly fond of men. Once again, though, life is not turning out how she expected.

While Aspen and Miles traverse single parenthood together, there’s no denying the chemistry between them. She can’t figure out how her charming boss knows how to pierce the protective layers of her heart, and it’s driving her mad. Mad with desire that is. Miles, too, is finding it hard to resist the reserved beauty who brilliantly takes care of his nephew and him. But with both their tentative hearts on the line, can they risk taking a chance on each other? Which will win? Love or the contract?