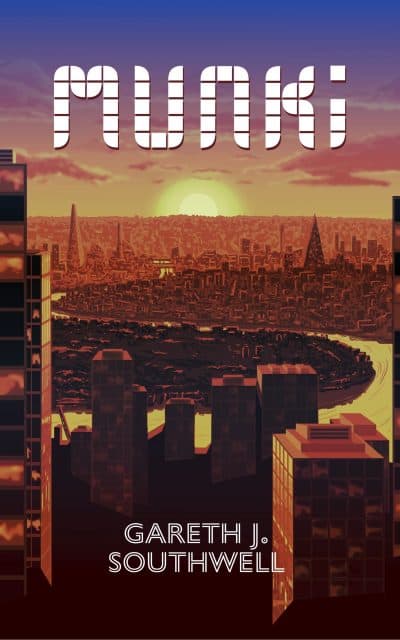 MUNKi: What Price Would You Pay to Live Forever? (Merrywhile)

What Price Would You Pay to Live Forever? When Cari Silvestri discovers her grandfather’s memories have been illicitly “stolen” by technology giant Merrywhile Industries, her search for proof and answers gradually draws her into a lawless digital underworld.

The winter her grandfather died, Cari Silvestri swapped her home town for a new life. But the past is not so easily outrun. Almost ten years on, Grandfather returns, his stolen memories repackaged by technology giant Merrywhile Industries as a slick marketing promo for their latest project: digital immortality. But when no one believes her, Cari’s search for proof and answers gradually draws her into a lawless digital underworld.

Mel Faith is also haunted by the past. Her journalistic career circling the drain, she finds herself still obsessed with the one piece she never filed—the tragic history of Michael Sommeil, grandson of Merrywhile’s founder. It’s a story with few leads and fewer prospects, but at whose heart—she’s sure—a secret still sits untold.

As their paths intertwine, the two women enter a world of masks and aliases, of mercenary hackers and corporate spies, and where, underlying it all, is the hunt for the Singularity – the point, both feared and hoped for, where AI will finally surpass human understanding, and nothing will ever again be the same.

Set in the near future, MUNKi is a sci-fi cybergothic fairy tale. From the rural slumber of the South Wales valleys, to the frenzied beat of London’s capitalist heartland, to the decaying grandeur of the canals of Venice, it tells a twisted tale of revenge, ambition and loss, a philosophical exploration of memory, death and identity, and the ambiguous role that technology has come to play in all our lives.