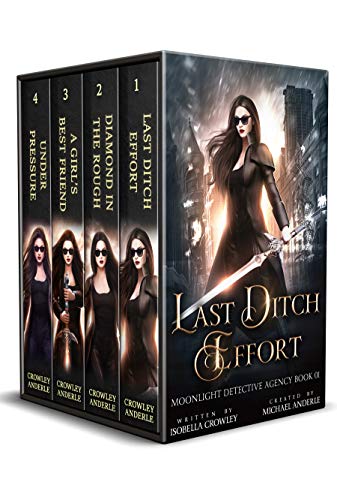 Remy is down to his last $100,000 . . . He’s in dire straits. Get this completed series from Bestselling authors Isobella Crowley and Michael Anderle in one giant boxed set today. Over 80 reviews on the individual books!

Get this completed series in one giant boxed set today!

Last Ditch Effort
While his rapidly dwindling checking account is a problem, Remy finds out the last company he owns is run by something that goes bump in the night.

And she is willing to bump him off if he fails to live up to her expectations.

Trying to get sober, Remy needs to work the day shift for Moonlight Detective Agency.

Can he learn the ropes before the faeries, werewolves or his supposed employee kills him off?

There is only one way to find out. Accomplish what Taylor sets out for him to do, or die trying.

Diamond in The Rough
The secret world is being hidden by a vampire hundreds of years old – and her human frat-boy apprentice.

He might shape up to be an asset. If she doesn’t kill him first.

Between setting up the office and hiring new preternatural staff, with some surprising . . . talents, Taylor tasks Remy with a new case.

She assumes he will stick to her instructions.

But this is Remy.

Reformed frat boy. Low compliance. With a desperate need to prove himself…

Of course, he won’t stick to the plan.

So when things heat up with the dwarven cartel—and the preternatural world order hangs in the balance—it’ll take everything Taylor has to prevent the city of NY being exposed to all she’s managed to kept secret for centuries.

Will Taylor decide that Remy needs to take the final nap for the benefit of everyone? Will everything go up in a Frat-Boy blaze of glory?

What happens when Remy starts to get a clue?

A GIrl’s Best Friend
Taylor sets Remy on the trail of a dwarven drug cartel responsible for supplying humans with preternatural drugs.

Is this just another way to test if Remy can stay alive?

Drugs that are deadly to humans. In order to prevent countless human deaths and keep the preternatural world hidden, Remy has to stop the deal from happening AND take out the supply chain.

This would be just a regular Tuesday except Moswen is closing in and her attacks are getting more targeted.

To save both worlds, the team have to survive—and that is going to take all their wits and resources—and wits are in short supply.

Under Pressure
With Moswen still on the loose and the whole preternatural world in mortal danger, Taylor realizes that drastic times call for drastic measures.

Meanwhile, Remy and the team—oblivious to the dire situation Taylor is getting into—work to track down Moswen and her goons.

A clear plan of what they’re going to do if they find her eludes them . . .

How do they take on the world’s oldest, most powerful vampire?

Of course, Moswen is tracking their every move and intends to pick them off one by one before they can get close.

Their only course of action is to go balls out to take her out first, in the most cunning way they know how . . .

Will what they know be enough? Or will Moswen accomplish killing Taylor and completing her plans?