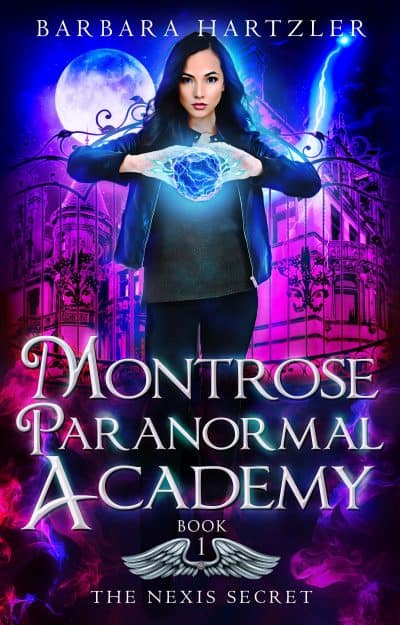 Welcome to Montrose Paranormal Academy—where the Three Societies rule all. Hi, I’m Lucy. And I just found out I’m not normal. I just have to play nice with the Three Societies long enough to dig up some dirt on my missing brother. Before they find out who I really am.

There are three secrets I must keep to stay under the radar:

1. Don’t show anyone the cryptic postcard my brother sent me from Europe.

2. Don’t let anyone know the truth, that I can see angels and demons.

3. Don’t fall for one of the dreamy leaders of one of the Three Societies . . . or don’t let anyone know if I do.

Three years ago my brother went missing in Europe without a word. Until the strange postcard I got six months ago.

So I enrolled at Montrose to find him. I just have to play nice with the Three Societies long enough to dig up some dirt . . .

Before they figure out who I really am.

Let them think my brother is the Seer. Because if any of these power-hungry secret societies find out the truth, they’ll never let me go.

For now, I’ll need to stay under the radar. But that’s hard to do when two rival society presidents take an interest in me.

Can I find my brother and master my surprise powers without getting caught?

I guess we’re about to find out.

The Nexis Secret is book 1 in the 5-book Clean Academy Paranormal YA series for teens. It’s a saga full of slow burn romance, snarky dialogue, and urban fantasy adventure set in New York City. Think Shadow Hunters meets Shatter Me with a dash of Bloodline Academy.