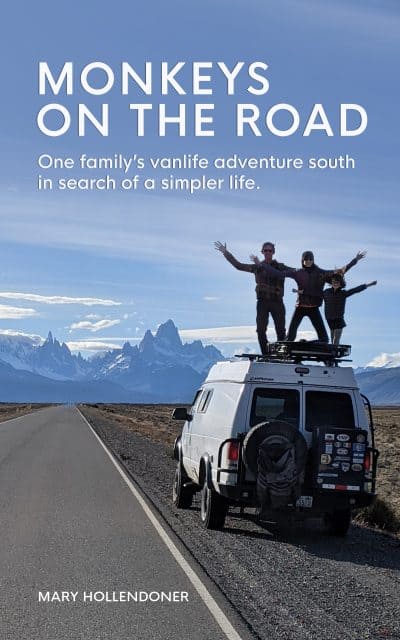 Monkeys on the Road: One family's vanlife adventure south in search of a simpler life

Thirty thousand miles driving from the USA to South America with a 6-year-old kid in a camper van. What could go wrong? “An optimistic and heartwarming tale.”

After a decade in the corporate rat race, Mary was ready for a change. Too much stress and not enough time with her family left her feeling that her priorities were all wrong. So she and her husband quit their jobs, pulled their six-year-old daughter out of school, and moved into an old camper van.

They planned to take a year off to drive from California to Argentina. What followed were three and a half years of heartwarming personal encounters, breathtaking wilderness campsites, and occasionally terrifying situations . . .

In Mexico, an angry mob surrounded them on a remote road and started shaking the van, threatening to smash the windshield with rocks. But later that day, a local family welcomed them into their earthquake-damaged home, insisting they stay the night and sharing everything they had.

While barreling down the highway in northern Colombia, their van’s battery exploded, filling their home-on-wheels with noxious fumes. The engine died entirely while parked in no-man’s-land between Ecuador and Peru, leaving them stranded for a month in a tiny border town.

They learned first-hand about the crisis in Venezuela when they got caught among thousands of refugees trying to cross the Colombian border. And they drove into Bolivia the day before the country erupted into a revolution, leaving them trapped for weeks in the capital city.

And they lived through one of the world’s strictest COVID quarantines in Argentina, staying for over a year in a small mountain town there.

Join Mary, John, and 6-year-old Lilly on these and other adventures in this feel-good read about a family trying to find their place in the world.