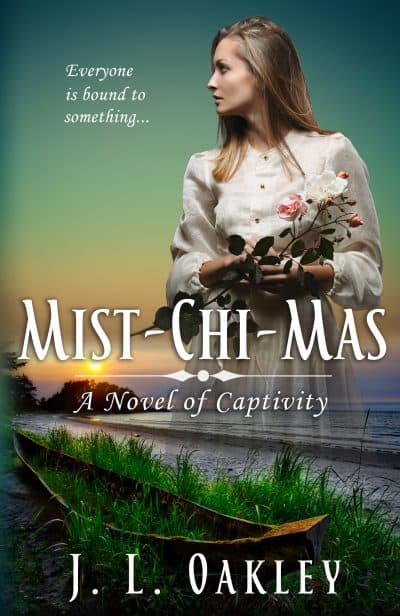 Mist-chi-mas: A Novel of Captivity

Seeking answers to a growing mystery, a recently widowed woman embarks on a journey to find the lover she thought murdered years before, unaware that she is stirring up an old struggle of power and revenge at which she is the heart..

In Mist-chi-mas, everyone is bound to something.

Jeannie Naughton never intended to run away from her troubles, but in 1860, a woman’s reputation is everything. A scandal not of her own making forces her to flee England for an island in the Pacific Northwest, a territory jointly occupied by British and American military forces. At English Camp, Jeannie meets American Jonas Breed. Breed was once a captive and slave— a mistchimas—of the Haida, and still retains close ties to the Coast Salish Indians.

But the inhabitants of the island mistrust Breed for his friendship with the tribes. When one of Breed’s friends is murdered, he is quickly accused of a gruesome retaliation. Jeannie knows he’s innocent, and plans to go away with him, legitimizing their passionate affair with a marriage. But when she receives word that Breed has been killed in a fight, Jeannie’s world falls apart. Although she carries Jonas Breed’s child, she feels she has no choice but to accept a proposal from another man.

Twenty years later, Jeannie finds reason to believe that Breed may still be alive. She must embark on a journey to uncover the truth, unaware that she is stirring up an old and dangerous struggle for power and revenge . . .