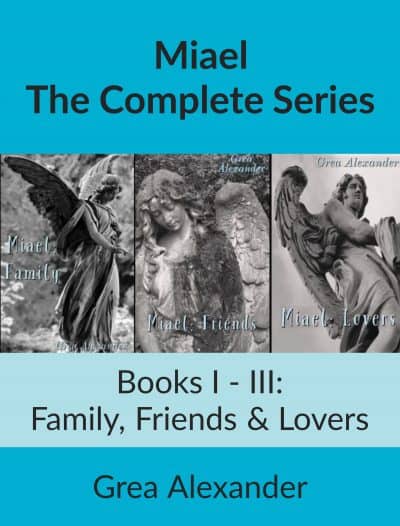 “The deliciously creepy, decidedly twisted and delectably eerie tale of a cursed Phoenix & his dubious influence upon a cursed Seraph.”
——————
This compilation edition includes all 3 books in the Miael series:

Curiosity may well have killed the cat, but it damned for eternity the phoenix and the seraph.

When the man she and M framed for murder makes one final, desperate appeal and Jessica is sent a summons, things start to go awry. Her entire world unraveling, Jessica is left with no choice but to face the past—both hers and Zahzarene’s.

At 30 years old, Jessica Watson has the career of her dreams, beauty, brains, wealth and a string of unsolved murders, death and destruction that seem to follow her everywhere she goes.

When the evil specters of Jessica’s past return, threatening to take away all she has built, Jessica has but one snarky, unpredictable hope: the phoenix Miael.

As the 4th rune forms and even Death itself is baying at her heels, will Jessica find the strength to break the curse that has plagued her and Miael for millennia or will she end up burning in the Lake of Fire, right along with him?