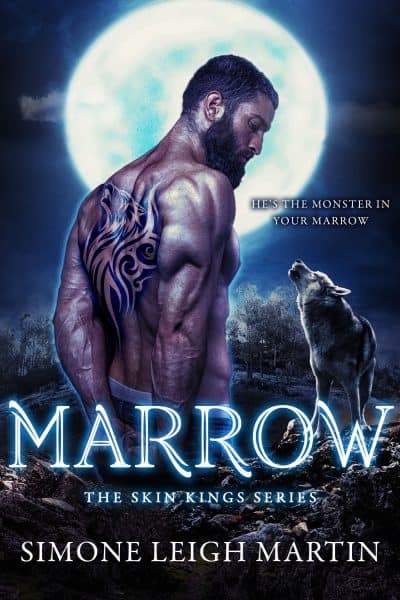 He’s at war with the shifter elite. She’s being hunted by his kin. Will she live long enough to prove a pack of two can change the world? Marrow is a standalone dark shifter romance from the Hunter Moon Academy world.

What does a good girl do when she meets a monster of a man?

Elijah Marrow calls himself a beast. An infamous skin king, he’s heir to the most ruthless pack on the continent. He can shift into an alpha wolf, but there’s something else lurking under his skin . . .

Me? I’m Stella Boone, a music teacher. I keep my head down, go to book club, and plan my Spring wedding. I’m not the kind of girl who mixes with violent wolf shifters—especially since I never knew they existed.

But meeting Elijah Marrow proves the world is a dark and strange place. Dark, because monsters are real, and they’re on a mission to put every cursed wolf into the ground. And strange, because under my good girl exterior, I discover I’m a rare alpha female. One who’s so powerful, I attract the attention of an omega male. He’s beautiful and damaged, and claims me as a mate before I know what that means.

But I’m a fast learner. And like the old me, I still believe in my Happily Ever After.

Only Elijah gave up on love a long time ago. He’s dead against continuing his family line, or putting anyone at the mercy of his beast. And with our enemies prepared to do anything to break us, getting him to fight against his instincts—to fight for us—might just be the toughest battle of all.

Marrow is a standalone dark shifter romance, set in the Hunter Moon Academy world. It’s for mature readers who love strong girls, alpha males and the monsters under their skin.