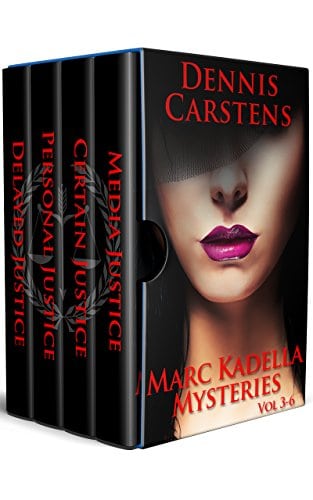 These gritty and witty legal thriller page-turners showcase defense attorney Marc Kadella’s most challenging cases: a kidnapping/murder becomes a media circus; a jailed psychopath loose on the streets; the classic black widow; and fraud leads to murder—close to home.

(1) Moderate
(1) Adult
Click or tap each bar for details
Log in to submit or change your own rating.

Media Justice
In the third The third Marc Kadella legal mystery, an adorable—and photogenic—two-year-old girl is kidnapped, and, when her remains are found, her twenty-two-year-old widowed mother Brittany is charged with her murder. But before she can even be charged she’s been tried and convicted by the media, at the center of which is Melinda Pace, a cynical, mostly-functioning alcoholic Minneapolis television personality with a “legal news” show called The Court Reporter. Not even in the alternative universe of television news could she be described as a reporter, since she makes no attempt at or pretense of presenting the truth, or even the facts. She does do a great job of producing through-the-roof ratings and whipping the public into a frenzy—with tragic consequences.

Certain Justice
Marc was torn about his work for Howie Traynor—his first homicide case—but even he was relieved when Howie was put away for forty years . . . Until, a decade later, his case is re-opened. Seems the former tech in the BCA lab was falsifying DNA evidence to collude with cops in putting away suspected violent criminals. And now not only Howie, but a handful of wrongfully-accused felons, are back out on the streets.

Marc and his longtime buddy PI Tony Caravelli don’t buy Howie’s come-to-Jesus act. And when an appeals judge with ties to the overturned cases winds up crucified in his own front yard, they’re convinced a dangerous killer has been wrongfully exonerated.

Personal Justice
Mackenzie Sutherland is shrouded in black at her most recent late husband’s funeral. Mackenzie’s not-so despondent face might tell more observant onlookers she’s not exactly your typical grieving widow—but then, no one can see through her veil. This is by design. Alluring and dangerously attractive, she’s been down this road before.

Three times, in fact. In Dennis Carstens’ FIFTH hard-boiled legal thriller, we meet the classic black widow. All of Mackenzie’s late husbands were millionaires. Each died suddenly and quite mysteriously of massive heart attacks (in spite of no history of heart trouble). And each left their children with nothing—and their young, beautiful bride (of about a year or so) with millions.

Delayed Justice
Maddy Rivers has her reservations about her new relationship with Rob Judd. Sure, he’s a handsome and brilliant investment analyst in a wildly successful securities management firm. But he’s constantly distracted. It seems something about the firm’s not quite right—or so he finally lets on to Maddy. Its returns are consistently solid, maybe a little too solid—or so suspects Patrick McGarry, one of Rob’s co-workers. After voicing his suspicions to Rob, Patrick heads up north for a weekend hiking trip—and winds up dead. It’s only a matter of days before Rob is next. And Maddy’s found unconscious at the gruesome scene of the crime, clutching the murder weapon.