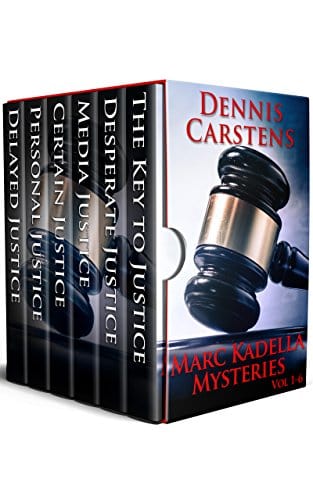 Marc takes the proverbial road less traveled, going from life as a frustratingly floundering defense attorney to that of a celebrated criminal lawyer, while representing a handful of colorful clients running the gauntlet from vigilante to psychopath. And Marc deftly adapts to each of them. But the hero’s journey is only part of the fun. You can almost see the men sporting fedoras, and the babes would stop traffic even without the cleavage Carstens makes their standard attire. And there’s a contemporary angle sure to please fans of both sexes—the toughest guy in the series is gorgeous investigator Maddy Rivers.

The Key to Justice
Financially embarrassed, getting a divorce, living in a shabby apartment, and distinctly short of clients, Marc Kadella’s beginning to question why he ever went into the law when a friend brings him the case all Minneapolis is watching—defending an accused serial killer. If he wins, it could turn his life around—if he blows it, he better go into sales.

Desperate Justice
After winning the case of a lifetime, Minneapolis criminal defense lawyer Marc Kadella welcomes the infusion of energy his career is receiving. Another lawyer asks him to represent the co-defendant in a murder trial resulting from a petty crime that spiraled out of control—the somewhat “accidental” murder of the nephew of Vivian Corwin, grande dame of the influential Corwin family.

Media Justice
An adorable—and photogenic—two-year-old girl is kidnapped, and, when her remains are found, her twenty-two-year-old widowed mother Brittany is charged with her murder. But before she can even be charged she’s been tried and convicted by the media—with tragic consequences.

Certain Justice
Marc was torn about representing oft-assumed psychopath Howie Traynor—his first homicide case—but even he was relieved when Howie was put away for forty years . . . Until, a decade later, his case is re-opened. And now not only Howie, but a handful of wrongfully-accused felons are back out on the streets.

Personal Justice
In Dennis Carstens’ fifth hard-boiled legal thriller, we meet the classic black widow. All of Mackenzie Sutherland’s late husbands were millionaires. Each died suddenly and quite mysteriously of massive heart attacks (in spite of no history of heart trouble). And each left their children with nothing—and their young, beautiful bride (of about a year or so) with millions.

No one can resist Mackenzie’s charm. Not her current family attorney, not even sharp, successful lawyer Marc Kadella.

Delayed Justice
Maddy’s new beau, investment analyst Rob Judd, is found brutally murdered in his home—with an unconscious Maddy at the gruesome scene of the crime, clutching the murder weapon. Convinced she was framed, Marc decides to take on the case in spite of his close connections to the client. He finds he must delve deep into the complex money laundering schemes of Rob’s employer to save Maddy from false imprisonment. Or worse.