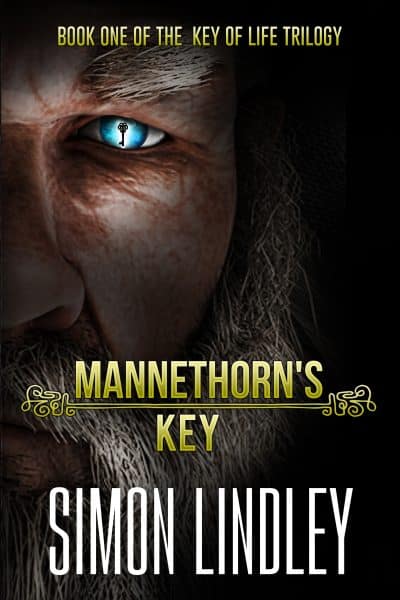 Mannethorn’s Key (Book One of the Key of Life trilogy)

Bart slumps over a toilet. A wizard confronts a foe. To triumph, he needs Bart—a washed-up broker plucked from a failed life and thrust into a testing ground where a guide with a penchant for lopping off heads will bring him to the world beyond—or kill him trying.

“At the end of an age, a Bearer wielded the Key of Life and ended Dragon’s Rule. Such powers and heroes, long dead or lost, must again be found . . .”

Algarth Willowbrow is about to gamble everything. His once-powerful Order is in ruins, and he faces an unwinnable battle to save his life and people. In a last, desperate attempt, he lures his arch nemesis, hoping to utilize him and reclaim a long-hidden magic, powerful enough to save the world—or destroy it.

Bartholomew Waxman, former derivatives broker extraordinaire has gambled everything—and lost. Bankrupt, unemployed, and divorced, his only hope for salvation is to try and rebuild his self-inflicted shattered life. But at a job interview, he is grabbed by a spell and thrust toward a new destiny, to wield a power so vast that it will decide a world’s fate.

The land’s only hope is the reluctant and unprepared Bartholomew, the wizard Algarth whose powers are gravely in doubt, and the Key of Life,with its true power hidden from all.