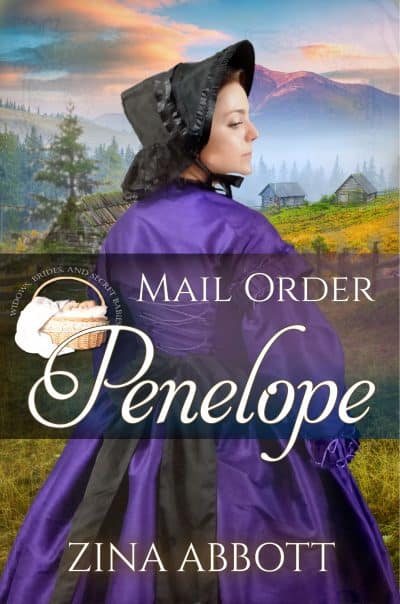 Widow Penelope travels by stagecoach to the Kansas frontier to marry, but finds out why he sent for a wife. Using the same escort patrol, post surgeon Marcus travels to care for injured soldiers. Which is greater, his clash with Penelope, or one with the Cheyenne?

Penelope Newton Humphry lost her husband to the war as surely as if he died in combat. Her sweetheart since her early teens, she waited until the war ended to marry Jeremy, only to realize he never fully returned. Dying from pneumonia, he leaves Penelope with nothing but his unborn child.

Penelope knows she must remarry—and soon. With her father and brother killed during Quantrill’s Raid on Lawrence, Kansas, her mother’s mind half-gone, and the farm sold to a neighbor to be fully relinquished once her mother, suffering from cancer dies, she accepts the offer of marriage from a man living near Fort Wallace she met through correspondence. Only, during the stagecoach ride to western Kansas, she discovers matters are not as she was led to believe.

As a regimental field surgeon, widower Dr. Marcus Garrett saw enough mangled bodies during his four years in the American Civil War to give him a lifetime of nightmares. With the war over, the turmoil within still rages. Only his responsibility for his thirteen-year-old son, Theo, being raised by his older sister, keeps him going. In a moment of weakness, he reenlists to serve as a post surgeon. Currently stationed in Fort Larned in Kansas, he knows to be assigned officers’ quarters so he can be reunited with Theo, he needs a wife—someone willing love a boy whose father is a stranger to him.

Traveling in tandem with the stagecoach for protection along the Smoky Hill Trail to Fort Monument to care for soldiers wounded in a confrontation with Cheyenne warriors, the last thing he expected to encounter was a young widow with a fourteen-month-old child headed the same direction. He tries to convince to return to eastern Kansas–to safety. She is determined her future lies to the west.

In exchange for a family for her and baby Jeremy, can Penelope learn to love a man who must first find peace within before he rebuilds a relationship with his son?

Please look for my other books in the “Widows, Brides & Secret Babies series,” Mail Order Roslyn and Mail Order Lorena. Although each story is written as a stand-alone book, the three stories are related. Part or all of them involve the stagecoaches and stations on the Kansas frontier in 1866 and 1867.