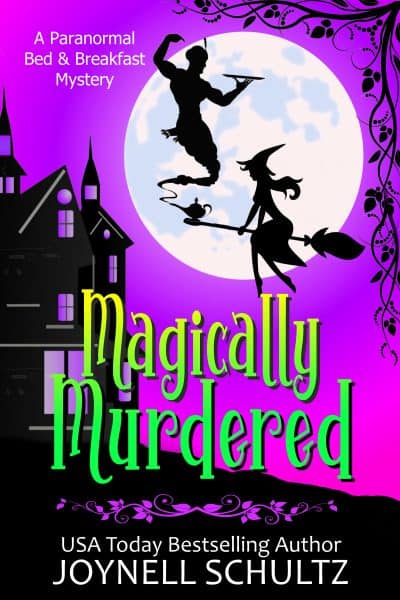 When two chefs wind up dead at a quaint bed-and-breakfast, it’s up to sleuthing witch Kyla to solve the case. But with trouble brewing in the kitchen and no shortage of suspects, are Kyla’s magical abilities any match for the devious culprit?

There’s something magically mysterious about Moonstruck Manor, and Kyla can’t put her finger on it.
And neither can the police.

Two murders had happened on the property in the past six months, and it can’t be a coincidence. Especially since both murdered suspects just happened to be hired as breakfast cooks. That’s why the police called in Kyla, a witch, as an outside consultant to work undercover as Moonstruck Manor’s latest culinary mastermind. Unfortunately, although she might be able to detect hidden magic, she’s absolutely no good at whipping up breakfast.

But this bed and breakfast is filled with suspicious people, from the gardener who knows a lot about toxic herbs to the housekeeper who was having an affair with both previous victims, and then there’s the handsome bed and breakfast manager . . . a man Kyla’s attracted to more than she ever thought possible . . . but that’s just a bit of magic, too.

With the murderer targeting the bed & breakfast chefs, can Kyla solve the murder before she becomes the next victim?

You’ll love this paranormal witch cozy mystery because it has witty witches and trouble-making genies. Not to mention twists and turns you won’t expect and even a little romance.