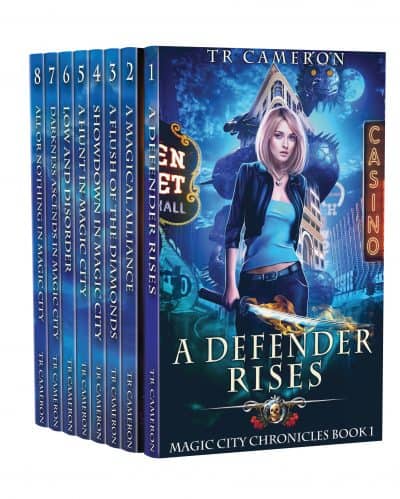 Magic City is full of hustlers, con men, and magicals out for a good time. The perfect mix of glamour and gangsters. Something big is about to go down in Magic City, and it’s not good. Can Ruby Achera and her friends stop it before it explodes and sends chips flying? Over 2,100 positive reviews on the individual books!

Magic City is full of hustlers, con men and magicals just out for a good time. The perfect mix of glamour and gangsters. It’s a magical version of Vegas and it’s a lot more than meets the eye.

Something big is about to go down in Magic City and it’s nothing good. Can Ruby Achera, her friends, and her family put a stop to it before it explodes and sends chips flying everywhere?

Grab this 8-book, urban fantasy boxed set to find out!

Ruby Achera just wanted a nice, quiet drink at her family’s casino in Magic City. The Mist Casino sits just above a kemana with an interior that would make a ghost feel right at home. Of course it does.

After all, Magic City has to compete with nearby Vegas. A different kind of magic.

Ruby is just back from University for the summer, catching up with an old friend when everything changes with a BANG!

A series of small blasts are exploding all around her. Chips are flying through the air. Someone wanted to announce their arrival in town. But who?

Ruby is about to get drawn into a battle for control of Magic City. They just made the fight personal. Is the Ebon Dragon Casino next?

Will Ruby’s secrets get in her way?

What waits at the end could change her life forever, if she survives the journey.