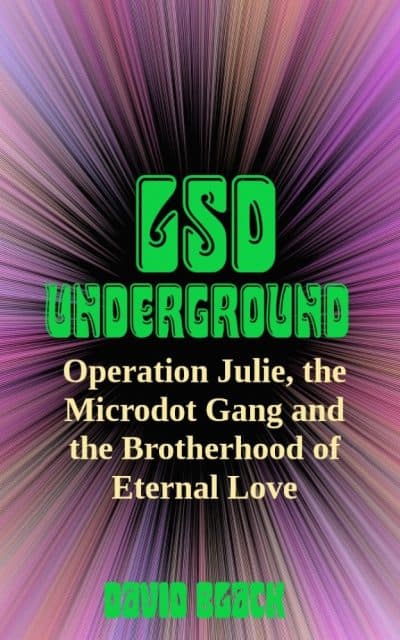 LSD Underground: Operation Julie, the Microdot Gang and the Brotherhood of Eternal Love

In 1968, an expatriate American Beat writer and two Liverpool chemistry students launched a conspiracy to illegally manufacture LSD, which grew into a global industry, making millions of trips. This books charts the genesis, rise, and downfall of the “Microdot Gang.”

In 1968, an expatriate American Beat writer and two Liverpool chemistry students launched a conspiracy to illegally manufacture LSD. It grew into a global industry, supplying the festival-going youth of the 1970s with tens of millions of trips.

It took the police several years to realise what had been established under their noses: laboratories manufacturing LSD; supply-chains for ingredients; and distribution networks which resembled the structure of terrorist cells. In 1977, “Operation Julie,” complete with a team of undercover “hippie cops,” carried out the “biggest drugs bust in British history.”

The hippies wanted to bring about mass psychedelic enlightenment, but their idealism was compromised by the exigencies of running an organised crime group. Their prosecution was weaponised in a culture war to uphold “traditional” values at the very time Margaret Thatcher was presenting herself as their enforcer.

Based on documented testimony and personal accounts from both sides, this book presents for the first time a roller-coaster, blow-by-blow account of the genesis, rise and fall of the LSD Underground.