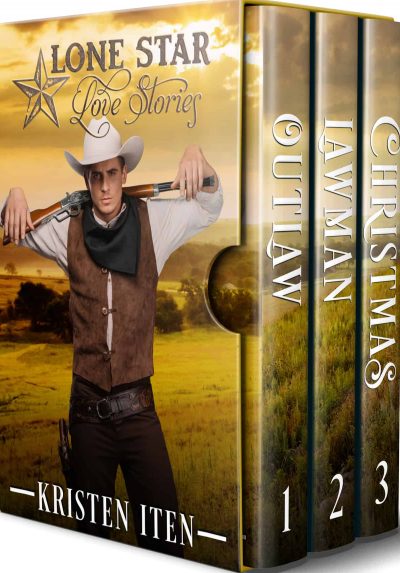 Immerse yourself in a wonderful world of romance, action, and adventure set in the old American West. This set includes three full novels that take place in Sweet Creek, Texas. Each sweet and clean romance is complete with its own satisfying happily ever after ending!

Loving an Outlaw
An outlaw cowboy on the run, a headstrong woman ready to put down roots, and the mystery that could kill them both.

Eighteen-year-old Abigail Dodd plans to join her older brother in Texas, but her cross-country journey is put on hold when he stops writing. With an aunt set on marrying her off to a greasy-faced older man, she leaves for the Wild West, uncertain what she’ll find once she gets there.

After ending up on the wrong side of the law, Jake Morgan needs to get as far away from Texas as possible. But he can’t turn a blind eye when he sees a coach under attack by an outlaw gang. After riding to the rescue, he meets feisty Abigail and promises to see her safely to her brother’s homestead. Upon arriving in town, it’s clear that Sweet Creek, Texas holds a sinister secret. Certain that her life is in danger, Jake vows to stay as long as it takes to make sure she’s safe—even if it cost him his life.

Loving a Lawman
A widowed sheriff, the beautiful boardinghouse owner he loves, and the danger that could steal her away forever.

Life as a lawman taught Micah Lagrange to listen to his head over his heart. As hard as it is to resist his attraction to the blue-eyed boardinghouse owner, that’s what he’ll do if it means she’ll be protected from the crossfire that goes along with his job. Friendship. That’s all he has to offer her. When one of her boarders, a self-centered politician, begins to take an interest in her, Micah can’t say the words Rosie needs to hear to keep her from making a terrible mistake.

Rosie Porter is ready for more than her afternoon visits with the sheriff during his rounds. Some days, she’s convinced he is too, but something is holding him back. While waiting on Micah to make the next move, Rosie’s surprised to catch the eye of a rich and powerful boarder. When he offers her a comfortable marriage of convenience, Rosie’s tempted to accept. With the flower of her youth fading, she fears a life of loneliness if she turns her less-than-perfect suitor down, knowing that Micah may never return the feelings she has for him.

When Rosie is injured during a mysterious attack on the boardinghouse, Micah sprints into action. It’s up to him to do whatever it takes to protect her—even if it means he can no longer deny his love.

Loving a Toymaker
A wealthy bachelor, a widowed mother, and the Christmas that gave them a second chance at love.

After inheriting his uncle’s fortune, Hans Christoph had everything except the one thing he wanted most—love. The once-poor carpenter, never wanted the life of a lonely bachelor, but he lost the only woman he ever loved to another suitor years ago. Since then, he’s buried himself in his work, hiding his heart away and knowing he could never love another woman the way he still loved Clara.

With weeks until Christmas, Clara Hargrove learned of the mortgage her recently deceased husband took out on their home. As a penniless, expectant mother of a young family, she doesn’t know if her children will have a home on Christmas morning. A chance meeting brings Hans and Clara together again, but she pulls back, ashamed to let him see how far she’s fallen. Faced with the prospect of becoming homeless, Clara has to decide: split up her family and send them to live with faraway relatives, or accept help from the man she turned down in her youth.

Hans has his work cut out for him if he doesn’t want to lose Clara, the children he’s come to love, and the happily ever after they all deserve.