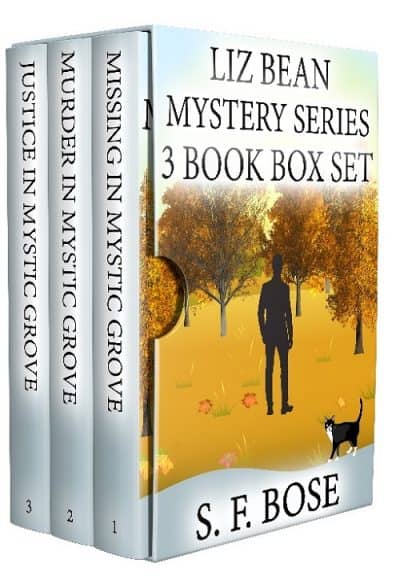 Now you can binge-read the first 3 books in the Liz Bean Mystery series.The series has been described as: “Gripping whodunit mysteries with more twists and turns than a runaway rollercoaster.”

Missing in Mystic Grove
It’s Thanksgiving Week at the Bean Family Bed and Breakfast in Mystic Grove. Liz Bean has returned to the family home after leaving a dangerous job out East. A job she can’t talk about. She’s looking forward to a peaceful and enjoyable holiday.

Then everything falls apart. A guest reports that a valuable piece of jewelry is missing. She suspects another guest took it and gives them a short amount of time to find it before she calls the police. Grandma Addie Bean shivers at the thought of the negative Yelp reviews the guest might leave if they don’t find her jewelry.

Addie pairs Liz with Sam Nolan, a quirky private investigator who’s a frequent diner at the B&B. Their meeting is like oil and water, but Liz knows they have to team up to help the B&B. When their prime suspect in the theft disappears, the situation goes from bad to worse.

As they investigate each lead, Liz realizes that she’s not the only one in Mystic Grove who’s keeping secrets. When the truth is revealed, it takes everyone by surprise.

Murder in Mystic Grove
Liz Bean has a new job as a private investigator intern for Sam Nolan Investigations in her hometown of Mystic Grove. When a longtime Mystic Grove resident is murdered, fear cuts through the village. Liz is shocked when she learns that her divorced mother’s boyfriend, Ben, is a key suspect in the murder. When her mother calls to hire Liz and Sam to clear Ben’s name, Liz hesitates. Her demanding mother has never asked for her help before. Failure is not an option.

After a debate, Liz and Sam take the case. They chase down leads, following the evidence as it twists and turns through Mystic Grove and beyond. With all of the lies and deception they find, Liz realizes that Mystic Grove isn’t the innocent village she remembered. Was the murder a simple robbery or an act of revenge? Or was the killing connected to darker activities like illegal gambling and organized crime? More threatening events convince Liz that the killer is still in Mystic Grove and might be gunning for her. Can she find the killer before he strikes again?

Justice in Mystic Grove
After a Mystic Grove resident is murdered, a lawyer hires private investigators, Liz Bean and Sam Nolan, to find the killer. He wants to exonerate his son, one of the murder suspects. The victim had many enemies. Were the killers two men spotted at the crime scene, the Mob, family members, or a deranged stranger? The truth stuns everyone and reveals the client’s true motive in hiring them.