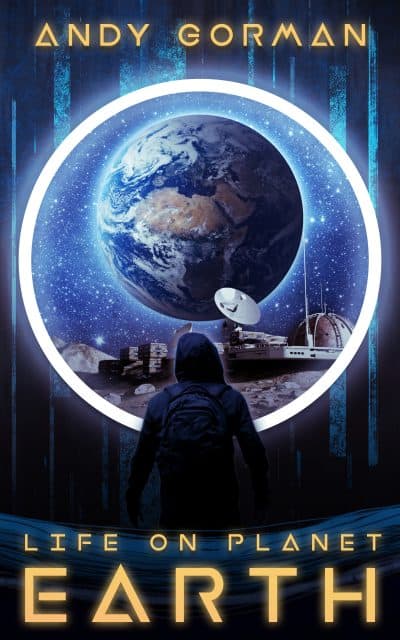 Humankind is finally coming home, but they are no longer the dominant species . . . Strap in for what readers are calling “a gripping, thoroughly enjoyable, deeply satisfying adventure!” If you love sci-fi that’s fun-filled and fast-paced, try Life on Planet Earth.

Humankind is finally coming home, but they are no longer the dominant species . . .

Nearly 700 years ago, the Terminal Plague turned Earth into a desolate wasteland—a world now riddled with the devolved progeny of Homo sapiens.

The descendants of the only survivors live out a bleak existence in a lunar city called Omega, where the privileged live deep underground while the poor suffer radiation poisoning on the surface.

Headstrong seventeen-year-old Liam Stone hates it there. When he’s not scrubbing shrimp and algae vats, he spends his limited free time in the Earth Simulator, training to leave the cramped halls and rigid schedules of Omega behind. Boasting higher scores and better biometrics than any other candidate, Liam is confident he will earn a spot on the return mission to Earth . . .

Until the moment his sister is chosen instead.

Devastated but unwilling to give up, Liam chooses to take matters into his own hands—to get to Earth at any cost. But Earth is not like the simulations, and the simulated monsters didn’t prepare him for the real threats he will face.