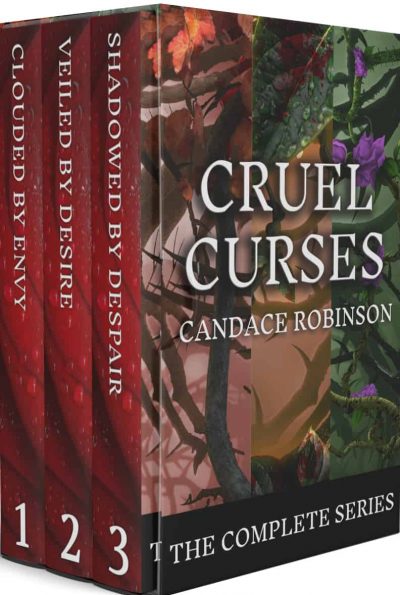 When fae Brenik discovers a way to get what he has always desired—to become human—he takes it. However, the gift turns out to be a curse that alters him in ways he never saw coming.

The complete Cruel Curses Series in one collection full of dark fantasy and romance. This NA box set includes Clouded By Envy, Veiled By Desire, Shadowed By Despair, and the bonus short story Surrounded By Light. Perfect for fans of Sarah J. Maas, Jennifer L. Armentrout, and Holly Black.

Brenik has always been envious of his twin sister, Bray. Everything always came naturally to Bray, even after crossing through a portal from their fae world, while Brenik spent his time in her shadow. So, when Brenik discovers a way to get what he has always desired—to become human—he takes it. However, the gift turns out to be a curse that alters him in ways he never saw coming.

Bray can’t help but be concerned for her brother, more so when he vanishes. While waiting for Brenik to return, she meets two brothers who realize she isn’t human. Her dark bat-like wings are proof of that. But somehow, an aching bond forms between Bray and the hot older brother, Wes.

When Bray reunites with Brenik, she finds he has an overpowering need for blood stirring within him. If Bray doesn’t help Brenik put an end to his curse, it will not only damage those who get close to him, but it could also destroy the steamy romance blooming between her and Wes.

The Cruel Curses Series is filled with shifters, magic, and a unique fae world in three addicting books that will leave you captivated and wanting even more.