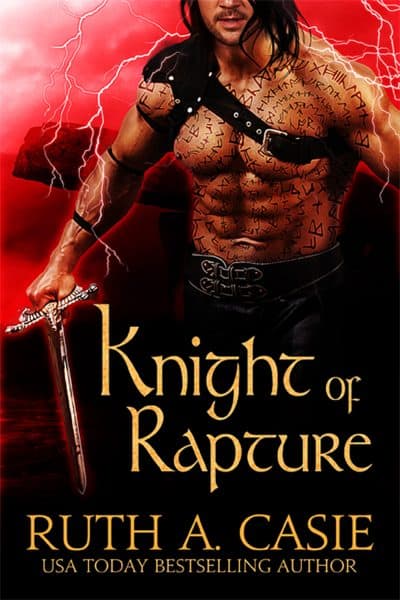 by: Ruth A. Casie

Lord Arik crossed the centuries to rescue his wife Rebeka. But it will be up to her to save them both.

He crossed the centuries to find her . . .

For months Lord Arik has been trying to find the right combination of runes to create the precise spell to rescue his wife, Rebeka, but the druid knight will soon discover that reaching her four hundred years in the future is only the beginning of his quest. He arrives in the 21st century to find her memory of him erased, his legacy on the brink of destruction, and traces of dark magick at every turn.

Bran, the dark druid, is more determined than ever to get his revenge. His evil has spread across the centuries. Arik will lose all. Time is his weapon, and he’s made sure his plan leaves no one dear to Arik, in past or present, safe from the destruction.
But their enemy has overlooked the strongest magick of all . . .

Professor Rebeka Tyler is dealing with more than just a faulty memory. Ownership of Fayne Manor, her home, has been called into question. Convenient accidents begin happening putting those she cares for in the line of fire. And then there’s the unexpected arrival of a strange man dressed like he belonged in a medieval fair—a man who somehow is always around when needed, and always on her mind. She doesn’t know who to trust. But one thing is certain. Her family line and manor have survived for over eleven centuries. She won’t let them fall, not on her watch . . . in any century.