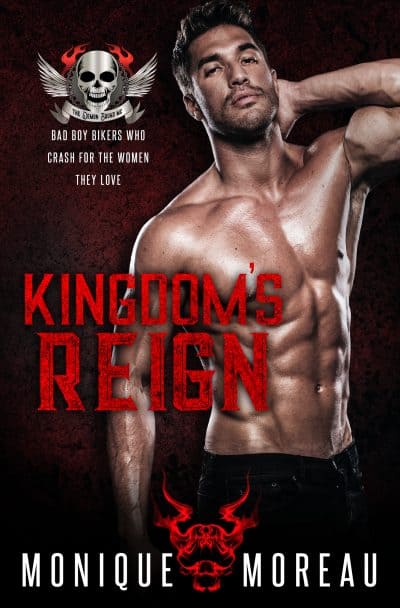 A grieving biker. A jaded attorney. Can they heal each other’s wounds? Kingdom’s Reign is a steamy, standalone bad boy biker romance with plenty of heat. Looking to ride in the fast lane? Rev it up with one click.

A grieving biker. A jaded attorney. Can they heal each other’s wounds?

Since the death of his patch brother, Kingdom has felt nothing but rage and loss. Until, he meets Sage on a trip to a tattoo shop to get fresh ink for his fallen brother. She’s sexy. Brilliant. And exactly the kind of challenge that makes him ache. If asked whether he deserves her, Kingdom’s straight-up answer would be no. But, nothing will stop him from taking what’s his. Not even her.

Being a no-nonsense defense attorney, the second Sage caught her fiancé cheating, she swore off men. While breaking that rule for a tatted up member of an MC seems like a monumentally bad idea, she can’t fight her attraction to Kingdom. When he invites her on a ride, she finds herself wanting so much more. Sage yearns to indulge in one of the sexiest and most dangerous men she’s met but fears risking her battered heart.

Can the unlikely pair help each other move on from the wounds of the past? Or will club tensions with a rival MC find a way to use their weaknesses against them?

Kingdom’s Reign is a steamy, standalone, bad-boy biker romance with plenty of heat.

Looking to ride in the fast lane? Rev it up with one click.