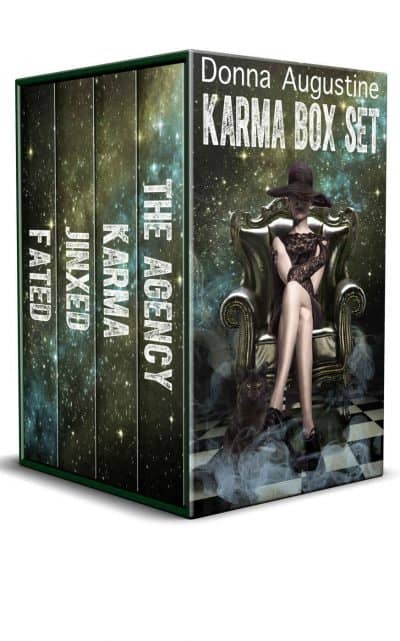 When Camilla dies, she doesn’t realize that it’s just the beginning of her journey. Recruited by the Universe to dole out karma, she’s thwarted at every turn. Fate, her handsome coworker, isn’t helping matters as he tries to oust her from the agency.

It’s not like I wanted this job. I wasn’t even in my right mind when I accepted the position.

Now, I’m surrounded by crazy coworkers like Lady Luck, who’s a bit of a tramp, and Murphy’s Law, who’s a bumbling oaf. But the worst is Fate. He’s got a problem with transfers like myself, and I have to see him constantly. It’s unavoidable. We’re hunting the same man, my murderer.

Jinxed
Karma, it’s what they call me and the very essence of who I am. When I died young, I was recruited by the agency that keeps the Universe running smoothly. As someone with a human past, most of my coworkers consider me inferior.

But not everyone. Something evil has been stalking me for centuries. It’s been biding its time, waiting for the moment when it will strike, and it needs me to to do it.

Its methods of recruitment are tearing apart every aspect of my life. I’m slowly losing myself, both mentally and physically. I don’t know who I can count on, but I’m finding out how much I’m willing to sacrifice to save the ones I care about.

Fated
Settling the cosmic score is what Karma was drafted by the Universe to do. But what happens when all the humans start going to the dark side? I’ve got to find the source, and the most likely suspect is my long time rival, who outclasses me in both power and resources.

Luckily, I’ve got a new partner, Fate, but he comes with his own set of complications. The confirmed bachelor has a target of his own.

The Agency
This is a short Karma prequel. This was written after the series was complete to give more insight into the events prior to Karma. It can be read at the beginning or end of the series.