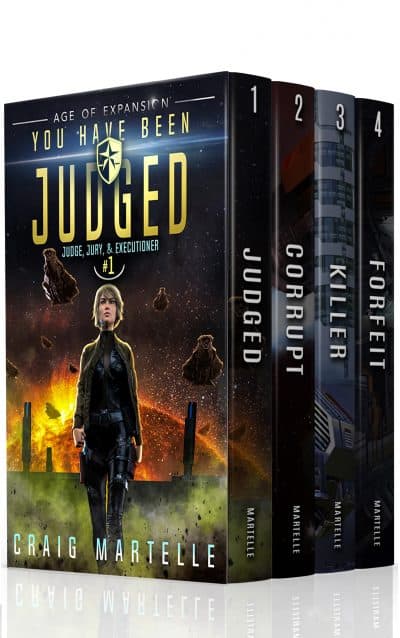 She’s a lawyer accused of a murder she did commit. She stands ready to accept her fate, even though her victim was a murderer. A second chance appears. Become more than a lawyer. Be one who judges and punishes the guilty.

She’s a lawyer accused of a murder she did commit. She stands ready to accept her fate, even though her victim was a murderer. A second chance appears. Become more than a lawyer. Be one who judges and punishes the guilty.

The first 4 books in the Space Opera Adventure Legal Thriller are here together for you in one boxed set!

You Have Been Judged
Could she look herself in the mirror after meting out justice? She’s about to find out. Rivka heads to space to be the Judge, Jury, & Executioner. Criminals have nowhere to go.

Destroy the Corrupt
No one runs a racket and gets away with it.

Not in the Federation and not when it steals business from The Bad Company. Punish the interlopers! But justice must be served. Is it a racket? Or are they just better at business?

Send in the Magistrate to investigate and apply the law. What will Rivka uncover? What justice will she deliver?

Keep pulling the threads. See what unravels. They keep leading her . . .

The locals are in over their heads. Or are they turning a blind eye?

The Magistrates band together to learn about the law, each other, and even themselves. They still need outside help to solve the case. Who do they call?

And Barnabas stops by to refuel and spin a tale. More training for the Magistrates.

But duty takes them away. Another Ambassador is brutally murdered. Rivka takes her team to find the perp and end the violence.

Very little is as it seems.

Your Life Is Forfeit
Red has a price on his head. Rivka is determined to find those who put it there.

Criminals commit crimes. Career criminals do it in secret. They are good at hiding.

Rivka’s latest case has her hunting fugitives. Red is on a mission to find them and make them pay for what they’ve done.

Her search leads her through dark warrens of political intrigue and ecological disasters. All the while, Rivka is swinging the scales of justice, judging the guilty, and delivering punishment.

Villainy and scum have toe-holds throughout the galaxy, but Rivka doesn’t mind stepping on their toes even when she’s not judging them. She considers it her job because no one is above the law.

Is Rivka’s search sanctioned or has she gone rogue? Will the Federation back her play?

Magistrate Rivka Anoa is the legal eagle you want on your side. No better friend. No worse enemy.