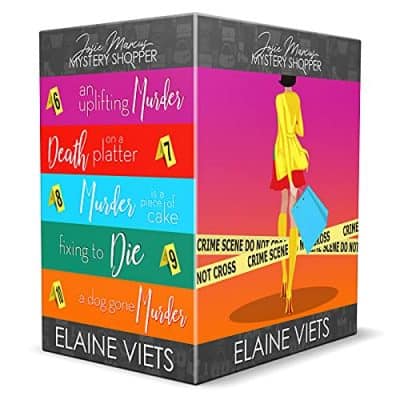 Suburban single mom Josie Marcus loves being a secret shopper. Businesses often live and die by Josie’s reviews. But when one (or two!) of the main characters in her review turns up dead, Josie uses her mystery shopping skills as an amateur sleuth to solve the crime.

An Uplifting Murder
When Desiree Lingerie hires Josie, she’s delighted to find her high school teacher, Mrs. Hayes, is now a manager at the chain. Less thrilling is the mini-reunion with her mean girl nemesis, Frankie Martin. But after Frankie is killed just steps from the shop—and her beloved ex-teacher is identified as a prime suspect—Josie gets hooked into another murder investigation. Mrs. Hayes is spilling over with motives—years ago, Frankie destroyed her career. Unfortunately, her alibi is pretty slim. So, with only her secret shopper smarts and a bit of amateur sleuthing experience to support her, Josie must strip away the lies in order to bust the real killer.

Death on a Platter
Josie is getting a taste of St. Louis’s foodie scene—Travel America Guided Tours just hired her to test area restaurants for an upcoming package. Their list includes Tillie’s Off the Hill, a classic Italian joint owned by Tillie Minnelli, a former classmate of Josie’s mother. It should be a pretty sweet gig, but the assignment quickly turns sour when an unruly customer dies after eating Tillie’s special sauce. While detectives move to put Tillie on ice for murder, Josie’s mom implores Josie to whip up another amateur investigation. The case has more secret ingredients than anyone anticipated. But there’s no time for Josie to savor all the possibilities, she must skewer the culinary killer before someone else is served a final course.

Murder Is a Piece of Cake
As a bride-to-be, Josie’s latest assignment is a gift—mystery shopping flower and cake vendors for a wedding website. She even meets another bride, Molly Deaver, at the local florist. Turns out, Josie and Molly have a lot in common, including the groom! Molly has been stalking Dr. Ted for months, but after his high-maintenance mother, Lenore, confronts the faux fiancée, everyone believes Molly is history. Instead, she’s murdered and Ted’s pistol-packing mama is cuffed for the crime. While it’s tempting to leave her future mother-in-law behind bars, Josie knows she and Ted can’t get married until Lenore is freed. It’s up to Josie and her amateur sleuthing skills to unwrap this case, clear Lenore’s name, and unveil the real killer . . . or her wedding bells could soon become death knells.

Fixing to Die
Josie’s been busy with a personal shopping project—scouring suburban St. Louis for a starter home for her and her newlywed husband, Dr. Ted Scottsmeyer. So she’s thrilled when Ted’s veterinary partner, Dr. Christine Cormac, hooks them up with a beautiful house, which her flaky sister, Rain, inexplicably abandoned months earlier. But before they’ve even picked out the paint, Josie and Ted discover Rain’s body beneath their backyard gazebo and Christine is immediately boxed up for murder. Now, Josie’s new home is a crime scene and Christine is headed for the big house . . . unless Josie steps in. Good thing she’s handy around a murder investigation, because she’ll need all her sleuthing skills to unpack the clues, flip the case, and nail the real killer.

A Dog Gone Murder
Josie’s been assigned to sniff around Uncle Bob’s Doggy Day Camp, one of St. Louis’s hottest pet spas. It doesn’t take her long to dig up dirt on the camp’s top dog, “Uncle” Bob Manning himself. Employee Frank Hyzy—Josie’s mom’s new boyfriend—reveals Bob should be in the doghouse for his cruel treatment of the canine customers. But before Josie can write Bob up, someone puts him down . . . and Frank is the cops’ prime suspect. While Frank definitely had a bone to pick with the animal abuser, Josie doesn’t believe he murdered Bob. So she must doggedly pursue the investigation on her own and hope she can cage the real killer before they fetch another victim.