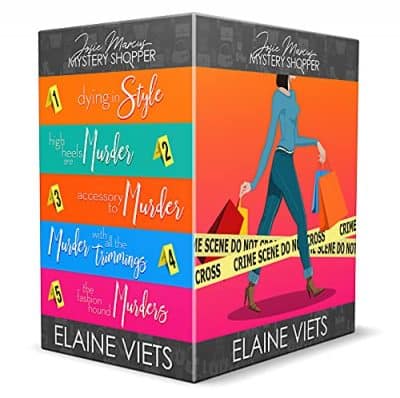 Dying in Style
Josie’s excited about her latest assignment: mystery shopping the stores of handbag designer, Danessa Celedine. A stunning socialite who frequently makes headlines with her hot Russian lover, Serge, Danessa sells exquisite purses to the rich and famous for a small fortune. Unfortunately, the Celedine shops aren’t nearly as dazzling as their clientele and Josie’s negative report could kill a lucrative deal to sell the handbag empire. Danessa swears it will also cost Josie her career. Businesses often live and die by Josie’s reviews, but when Danessa and Serge are found murdered, she’s suddenly linked to an actual homicide…as chief suspect! Now, Josie will need all her secret shopper subterfuge to investigate the crimes, clear her name, and stop the killer from claiming another fashion victim.

High Heels Are Murder
Josie finally has her life back on track. Not only is the single mom dating the hottest barista in Maplewood, but her boss just assigned her a coveted gig—mystery shopping the Soft Shoe. The exclusive store is a shoe lover’s dream, but its top seller, Mel Poulaine, is a waking nightmare. His hands-on fascination with feet goes far beyond professional interest. Josie’s scathing report kills Mel’s career . . . but later that night, someone kills Mel himself. When Cheryl Malmy, daughter of Josie’s nosiest neighbor, becomes a suspect, Josie’s mom begs her to investigate. She’s shocked by what she uncovers. It turns out “Perfect Cheryl” has more than a few dirty secrets in her closet, drawing Josie deeper into the seedy suburban underbelly. But can she trip up a killer who always seems to be one step ahead?

Accessory to Murder
Josie has an eye for the finer things in life. Good thing her best friend Alyce Bohannon doesn’t mind sharing a taste of the high life in her posh gated community, Wood Winds. But when Alyce’s neighbor, well-heeled scarf designer Halley Hardwicke, is murdered, the neighborhood buzzes with ugly gossip. Talk is cheap…until the detectives begin questioning Alyce’s husband, Jake, about the crime. So Josie decides to do a little sleuthing of her own, going undercover in swanky suburbia to unravel the secrets of the cliquey Wood Winds wives, untangle Jake from the murder investigation, and uncover the truth before the killer snags another victim.

Murder with All the Trimmings
Josie’s latest mystery shopper report won’t help business at Naughty or Nice, Maplewood’s raunchy year-round Christmas store. But she can’t worry about work when her ex-dealer, ex-convict, ex-boyfriend, Nate Weekler, just came home for the holidays, prepared to fight Josie for custody of their daughter. Josie wishes he’d catch the next sleigh out of town, but instead, Nate is poisoned…and suddenly Josie is a person of interest. With Nate’s criminal past, he’d never make Santa’s “Nice” column, but his own list of enemies also includes plenty of “Naughties” who might want him dead. Josie will need her team of little helpers to wrap up this case, before the killer commits another holiday homicide.

The Fashion Hound Murders
Josie’s latest assignment is one for the dogs—literally! A pet store chain has hired Josie to mystery shop its stores and she discovers possible puppy mill suppliers. When a tipster is killed in a suspicious hit-and-run, Josie’s job suddenly gets a lot hairier. But she’s not ready to tuck her tail and run just yet. Using every bit of her secret shopper savvy, Josie must follow the designer dog trail to expose the illegal breeders, shutter the puppy mills, and finally collar the vicious killer on the loose.