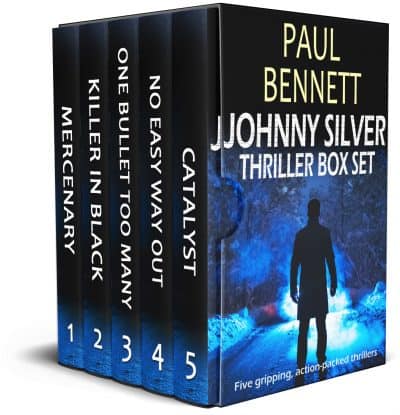 Meet Johnny Silver in this pulse-racing thriller series from bestselling author Paul Bennett. Get five action-packed thrillers, with over 300 reviews, in one bargain box set today!

Meet Johnny Silver in this pulse-racing thriller series from bestselling author Paul Bennett. In this five-book box set you’ll get Mercenary, Killer in Black, One Bullet too Many, No Easy Way Out, and Catalyst. Don’t miss out on this collection of unputdownable thrillers. Get five action-packed thrillers in one bargain box set today!

Mercenary
Don’t mess with his family. Jonny Silver’s banker brother disappears along with ten million euros. Only Johnny can track him down. But the trail leads into a world of gambling, prostitution and drugs that shocks the core of a man who thought he’d seen everything.

Killer in Black
Johnny’s comrade finds himself in the crosshairs of a crooked politician. But Johnny’s team will always protect their own. Even if that means going head-to-head with the ruthless Killer in Black. Are Johnny’s men strong enough to best him? Or have they finally met their match?

One Bullet too Many
Life by Lake Cezar is idyllic. Until crime lord Emil Provda starts a prostitution racket. Johnny’s gang vow to shut him down. But the odds are stacked against them. The stakes rise, culminating in a bitter battle on a deserted island. Out of nowhere, a final bullet is fired. Who will be left standing once it hits its mark?

Bo Easy Way Out
Johnny moves to the Caribbean with his beautiful wife Anna, ready to put his fighting days behind him. Life is blissful — until an agent comes to him with one last mission. A girl has been kidnapped by the son of a powerful drug baron. Can Johnny rescue her and save his wife in the process?

Plus an unforgettable standalone:

Catalyst
AUC petrochemicals unveil a miracle product that converts plastic into fertilizer. It sounds too good to be true. And Kit Harper uncovers the danger behind the claims. This product could do irreversible harm. But someone will do anything to silence him. Can Kit save himself in time to protect the planet?