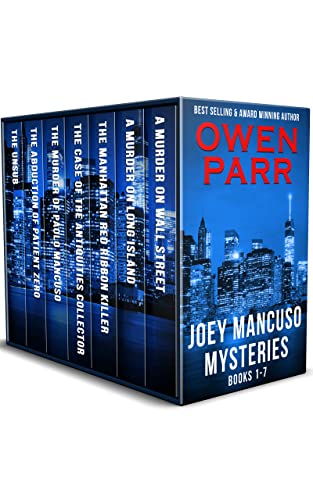 Former NYPD Detective Joey Mancuso and his half-brother, Father Dominic O’Brian, are private investigators. They’re known as The Last Advocates of the Victim. This seven-book box set is a great opportunity to read this rare mystery series.

Book 1
A priest, an ex-cop, and three babes walk into a bar . . . Lucky for readers, that’s a great opportunity for the kind of rare mystery series with something for everyone—a tough guy, three awesome women, and a classic Golden Age gentleman-detective clergyman. The twist? The cop and the cleric are half-brothers who operate a PI firm out of their bar.

Book 2
Too many leads, too few breaks, and only ten days to go in the trial of the year . . . Things are finally turning around at Captain O’Brian’s Pub and Cigar Bar, an oddball location for a PI office, but the kind of warm, buzzy scene every mystery reader loves. After first getting fired, then earning a glowing reputation in his first high-profile case as a PI, ex-NYPD Detective Joey Mancuso’s back on the crime scene with his half-brother and Brooklyn’s favorite man of the cloth, Father Dominic O’Brian.

Book 3
Manhattan plagued by terror: Red Ribbon Killer Rampages! When meticulous NYPD cop-turned-private eye Joey Mancuso is called in to help the Midtown South precinct solve a series of brutal murders targeting young professional women. Notorious serial killer Ted Bundy once said: “Murder is not about lust, and it’s not about violence. It’s about possession”—a notion that haunts the NYPD.

Book 4
Their daughter goes missing and they don’t call the cops? That’s one of many intriguing mysteries deliciously and intricately layered in these pages. Layer upon layer, twist upon twist, secret upon secret, this is a case tailor-made for a Sherlock Holmes devotee like private investigator Joey Mancuso.

Book 5
At 16, he saw his dad gunned down. Now he has a chance to find the killer . . . PI Joey Mancuso was just a kid when he watched a stranger walk into a Little Italy bar, shoot his mobster dad in the chest, and calmly walk back out, disappearing into the Manhattan din. The murder was never solved. And the old mob adage “an eye for an eye” went unfulfilled.

Book 6
The woman who knew too much . . . As the men around her are dropping like flies, NYC private eye Joey Mancuso finds himself neck-deep in a maze of a murder mystery—the kind that weaves through military secrets and international espionage—at the center of which is the woman he loves. The vic, Oscar Stanton (name etched into his designer trousers), was gunned down in Washington Square Park in broad daylight, just after a lunchtime rendezvous with a business associate.

Book 7
New York-based private eye Joey Mancuso travels to the lush, verdant shores of Miami Beach. A young hedge fund employee—a kid right out of college, green as can be—was killed by an anonymous sedan while on a motorcycle ride after hitting the South Beach clubs. Miami Beach police don’t seem interested, but Joey does—the kid’s dad is a friend of a friend.

Fans of Sherlock Holmes and Detective Poirot will devour Mancuso.