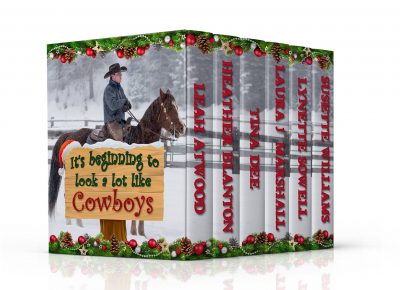 Six romantic Westerns by six best-selling authors! From mail-order brides to women willing to take a husband any way they can get him, these ladies find their way to the wild, wild West, but will they find love in time for Christmas?

Whiter than Snow by Leah Atwood
Tallie Duncan hasn’t known love since she was a young child, and she finds herself on the streets, in a town and land that she knows nothing about.

Jeremiah Scott is returning to Weatherton, Wyoming, after a six-year absence. While in Cheyenne, arranging business deals and outfitting his ranch, he decides to find an impromptu bride.

But when the bride is more than he bargained for, will it destroy his plans for marriage?

To Love and Honor by Heather Blanton
Joel Chapman feels like a failure. Losing a leg in battle, he failed to fulfill his duty as a captain. According to his wife, without two good legs, he’s failed as a husband and provider. Along with his self-respect, his spirit is dying a slow, painful death.

Angela Fairbanks is the daughter of a tyrant—a cattle baron known for his iron fist and cold heart. She has no doubt once he learns she is carrying an illegitimate child, he will banish her from the ranch.

Compassion and honor overtaking his good sense, Joel offers a noble lie to protect Angela and secure a home for her and the baby: one day as her husband, and then he’ll “abandon” her.

Will the noble lie become simple deceit? Or is he man enough to resist his heart and keep his vows?

A Groom for Christmas by Tina Dee
Addie Langford is desperate. Christmas is just around the corner and she’d love nothing more than a holiday break from the constant meddling of her family and their determination to find her a husband. Just when she thinks she’d gotten rid of one poor fellow, she lands right on top of another—literally. When he looks past her physical imperfection, will she also learn to look past it and find love?

Rhett Marshall just wants to make his way in the world. He’s looking for a job as a ranch hand, but after a shotgun wedding, he finds he’s gained a wife instead. The problem is that Addie is so much more than what she seemed, like no girl he’s ever met. After getting to know her, the big question is whether he’ll stay or go when the choice finally arrives.

Stone Tyler Wayne, the man with three first names, is just a simple cowboy. He has little to show for his hard-working ways other than the calluses on his hands, yet he folds these hands in consistent prayer to the One who sees his heart.

Nan Kinsey is the boss’ daughter. Her father plans to marry her off to the ranch owner’s son next door. The problem is, she is drawn instead to Stone.

Will their Christmas prayers be answered?

Mistletoe Mistake by Lynette Sowell
Matthew Thomas cooked up the idea of helping the crumbling town of Angel Vale, Wyoming, by arranging for mail order brides from the East—including a bride for himself until his feet get colder than a Wyoming blizzard. Widowed Sophia Webster tries to make a new start in Wyoming by staying true to her word and helping Matthew establish his newspaper, but come spring, it’ll be back East for her—unless Matthew’s change of heart can convince her otherwise.

Husband of the Bride by Susette Williams
Widowed for years, Ma has been the matriarch of the family, facing the challenges of raising four boys who are now men. With the arrival of her first grandchild imminent, Ma finds herself face-to-face with the town doctor, who has very differing views than her own.

Doc is very opinionated, and he’s of the opinion that it is time for Ma to look out for her own needs—or desires. He’s old enough to know you can’t live in the past, and you need to move on to have a future. But can he convince a very determined woman he’s worth settling with?

Will Ma be able to keep up with her four sons and their new brides and survive the holidays, or will her family grow even larger—in more ways than one?