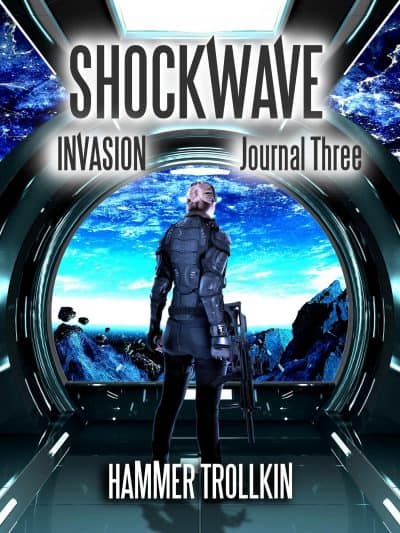 Earth’s been invaded by alien monsters. Twice! We barely escaped. But we’re an amazing people well-practiced in the art of war. Now, it’s our turn. With resolve and back engineered alien tech, we’re taking the war to them. Is it the last days of the Cygnus Prime Empire?

Shockwave: Invasion is imaginative Sci-fi adventure with plenty of action, as the people of Earth are forced into interstellar war with an ancient galactic empire.

It has been 10 years since the first alien invasion. We thought they were the monsters rather than merely a preview of what was to come. The real monsters showed up a few years later.

It’s a wonder we’re still here. Reverse engineering all that advanced alien equipment opened whole new branches of science. That alien tech leap, together with our own achievements, gave us the means to travel between stars, and produce weapons of war to rival our enemy. Just as important, the first invasion united us as one people, with a noble purpose. And we have had enough!

It’s time to do some invading of our own and cut off the head of the snake. Or die trying.

Shockwave is a special forces team with unique capabilities; the tip of the spear in the escalating conflict that is moving toward a galactic scale.

Sad for us, the evidence is mounting that this present evil empire is only one more layer in a universe filled with dark powers intent on our destruction.

For those who might enjoy some spiritual content, there is a round of theological contemplation at the end of the book, in the interlude section, titled Songs of the King. Where might aliens fit in, within the concept of an immense fallen universe? That serpent-thing in the Garden came from somewhere. The section has a Christian basis immersed in a decidedly Sci-fi frame of reference.