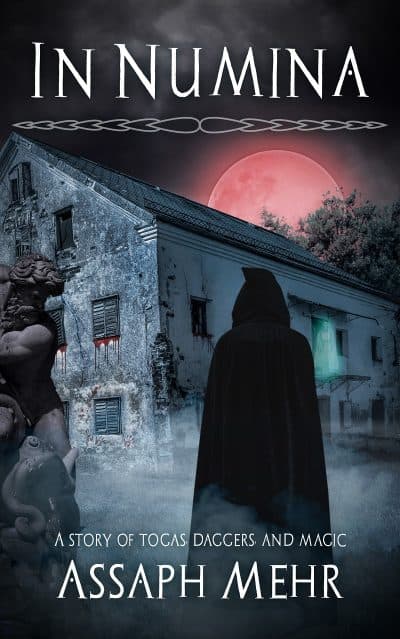 In Numina (Stories of Togas, Daggers, and Magic Book 2)

Apartment houses are standing abandoned, the tenants claiming the gods have cursed the buildings. Enter Felix the Fox: neither a traditional detective nor a competent magician—but something in between.

This is a story of Togas, daggers, and Magic—for lovers of Ancient Rome, Hardboiled detectives, and Urban Fantasy.

A rich landlord finds tenants are abandoning his apartment buildings, spouting tales of horrific events and whispering that the old gods—the numina—came alive and cursed the buildings.

Enter Felix, a professional fox. Dressed in a toga and armed with a dagger, Felix is neither a traditional detective nor a traditional magician—but something in between. Whenever there is a foul business of bad magic, Felix is hired to sniff out the truth. Now he must separate fact from superstition—a hard task in a world where the old gods still roam the earth.

In Numina is set in a fantasy world. The city of Egretia borrows elements from a thousand years of ancient Roman culture, from the founding of Rome to the late empire, mixed with a judicious amount of magic. This is a story of a cynical, hardboiled detective dealing with anything from daily life to the old forces roaming the world.

“Mehr creates a vivid cast and an equally vivid setting in which magic just seems to fit in perfectly.” –Richard Knaak, NYT best-selling author of Legends of Huma

“Mehr’s imagined world based on ancient Rome feels at once familiar and dreamlike.” –Ruth Downie, author of the acclaimed Medicus series of Roman mysteries