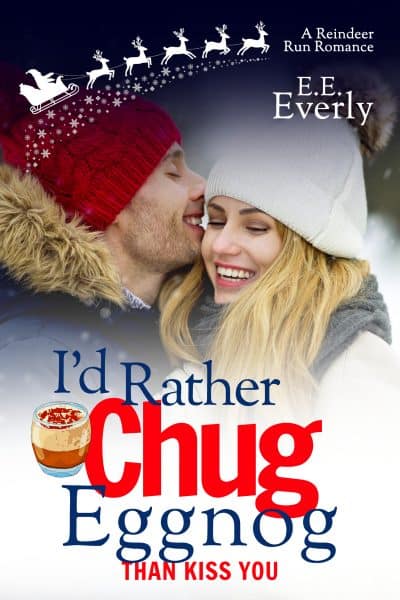 I’d Rather Chug Eggnog Than Kiss You (Reindeer Run)

When Mr. Health Nut waltzes back into her life, he reminds her of the painful loss that made her shun healthy habits—and makes her wish he’d go back to the nuthouse he emerged from.

Courtney has a strong distaste for health food. Her mother lived a strict, health-conscious lifestyle so much so that her preference for smoothies left Courtney with a taste aversion and a gag reflex. After her mother’s death, Courtney takes unhealthy eating to a new level by drinking and partying.

Then one night, Jamison saves her.

His piercing eyes leave an impression Courtney can’t forget, or rather wishes she could.

Several years later, Jamison runs into Courtney after she agrees to run for a charity 5K race. Despite her junk-food addiction, Jamison says he can help her get into shape, but Courtney wants nothing to do with Judgmental Jamie. He saved her once; she won’t let him interfere with her life again. She’s determined to keep her walls up and his smoothies away.

Courtney would rather chug eggnog than kiss Jamison Garner and let him into her heart.

I’d Rather Chug Eggnog Than Kiss You is a second chance, small-town, sweet Christmas romance in the Reindeer Run series, which can be read in any order! If you like an awkward heroine, an adorable overachiever, and loads of holiday fun, then you’ll love this book by E.E. Everly.