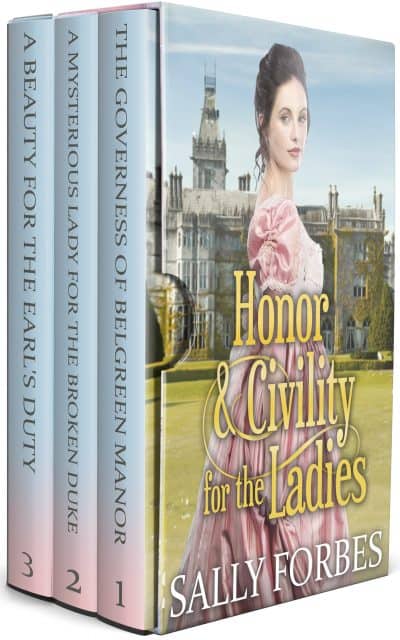 1. True love comes in the form of a disguise . . . 2. One should never be defined by their past because everyone deserves a second chance . . . 3. A scandalous reputation, a chance encounter, will it end in true love?

Lady Juliet Barnet is faced with a dilemma when her mother reveals that her father plans to give her hand in marriage to the Earl of Falstone. Juliet’s mother, fearing that her daughter will be doomed to a loveless marriage, devises a plan to help her escape. Juliet assumes the identity of Ellen Lewis and arrives as the newly-employed governess for the daughters of the Marquess of Belgreen.

2. One should never be defined by their past because everyone deserves a second chance . . .

Lady Diana and her mother have returned to London to spend Christmastide with her father who has been away in the Far East. Five years ago during her debut, she fell madly in love with the Marquess of Winsby. But after revealing her secret to the Marquess, he called off their courtship. Fearing that Diana’s reputation would be irreparably ruined, her mother sent her to stay with a distant cousin in Bath. But during the holiday season, Diana’s old memories and secrets come back to haunt her.

3. A scandalous reputation, a chance encounter, will it end in true love?

Lady Bridget Atherton, the eldest daughter of the Earl of Brentfield, is in dire need of a husband. Her father is a wastrel and has squandered most of the family’s fortune on drinking and gambling. Lady Bridget’s reputation has been ruined by her father’s scandalous behavior that led to a failed Season a year ago. She is left with no other choice but to pursue a gentleman whose reputation has been similarly tainted.