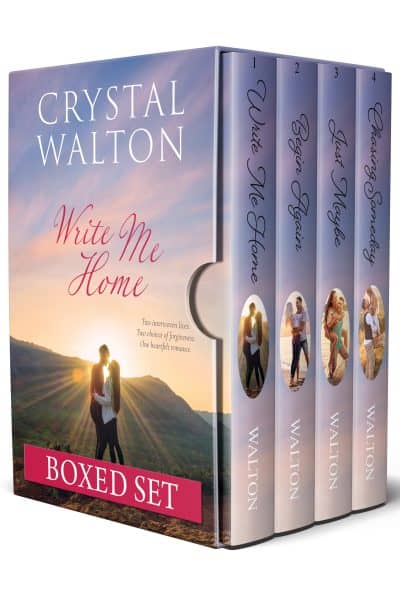 Home in You Series Boxed Set

Escape into a heartwarming collection of contemporary, inspirational romances full of small-town charm, memorable family members, and the gift of grace found in second chances.

Write Me Home
He lives by his heart. She lives by her plans. Until an unseen enemy and growing affection threaten control of both.

Returning to his hometown in the Catskills is the last thing firefighter Ethan DeLuca’s ready for. He’d rather leave memories where they belong—buried under ashes. But if he doesn’t step up to take care of Nonna, who will? Working at the camp down the road seems like the perfect solution. Until his feisty redheaded boss ends up being one fire he has no idea how to put out.

Begin Again
What happens when a free-spirited artist from big-city New York collides with an uptight business owner from small-town Ocracoke? Fireworks. The kind neither saw coming.

Thanks to the distraction of playing consultant to a single dad she’s determined to crack, she can almost forget about the past stalking her back home. But she never counted on the real danger being a picket-fenced life she has no business falling for.

Just Maybe
When a case of mistaken identity spirals into a more-than-complicated fake romance, an adventure seeker and a grammar fanatic just might’ve met each other’s match.

Three weeks. That’s all the time self-made billionaire Cooper Anderson has to respond to discovering he’s a single dad, sell his lake house, and catch a one-way ticket across the world. The quick-witted nanny responding to his ad couldn’t be more of a lifesaver . . . until the secrets she’s hiding get a little too close to exposing his own.

Chasing Someday
A country boy looking to win his best friend’s heart. A waitress afraid of giving hers away. And one crazy, impromptu dating plan that’s about to change everything.

Ex-model Livy Hensley has exactly three talents: making coffee, landing herself in the most awkward moments known to man, and failing miserably at relationships. But when the sweetest southern boy on the planet offers to be your dating coach, who could say no? Between struggling to open a café and trying to atone for a consequence of her past, Livy can use all the help she can get. Besides, what could possibly go wrong on a few practice dates with your best friend?