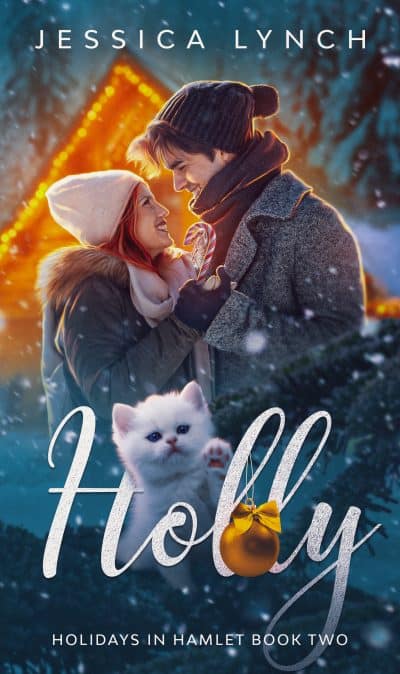 Travel blogger Holly Hansen heads to small town Hamlet for the holidays—where a lost cat leads her straight to mayor Xavier Miller’s doorstep. When he enlists her help with the town’s Christmas gala, will their budding attraction give them both a reason to celebrate?

Christmas and kitties, a match made in Hamlet.

Holly Hansen doesn’t know what she wants to do with her future.

For as long as she can remember, she’s lived most of her life either behind a computer screen or—due to her social anxiety—going off on her own. Because of that, she has passable relationships with people all over the world, and the travel blog she’s been running since high school is more successful than she ever dreamed.

So why isn’t she happy?

Last Christmas, her only IRL friend moved to a small town in the middle of nowhere to fill some strange clause in a dead relative’s will. This year? Gloria has decided to stay—and she wants Holly to come for a visit.

Spend the holidays in a place where there isn’t any television, telephones, or internet? Really?

It sounds impossible . . . but it also sounds tempting. Figuring why not, she decides to spend the month of December offline—and that’s when she meets Xavier Miller.

Xavier is the mayor of Hamlet, but he’s also the man who takes care of any animal in need. When Holly finds a lost cat, she’s told to bring him to Xavier. It should have been as easy as dropping him off.

Why, then, does Holly now have a cat of her own—not to mention a sudden crush on Xavier?

When Xavier mentions the upcoming Christmas gala in town, Holly jumps at the chance to get closer to him by helping him set up for it. Even though she knows she’s only staying for a few weeks, as the kindhearted mayor gets under her skin, Holly starts to wonder what’s better: traveling the world on her own, or settling down in one place with the man of her dreams?

Holly is a full-length, low stakes, low angst, Christmas novel (60,000+ words) set in Hamlet, a cozy, small town in the middle of nowhere—where everyone knows your name and your business, too.