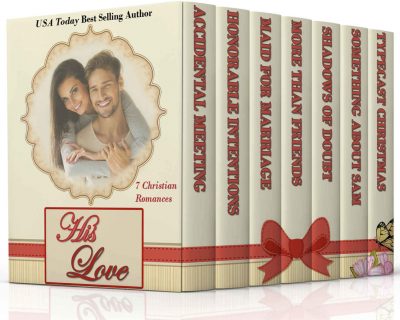 Accidental Meeting
If a day can go from bad to worse, it does for Abbey Martin. She runs into Bruce Harrington on her way home—literally.

Bruce Harrington was on his way to a very important meeting. That was until a raving lunatic with brown, bouncy hair spiraled towards him in her car and then on foot. Maybe he should count it a blessing that when she sent him cascading over the side of the embankment—he wasn’t in his car.

To make amends for causing Bruce to break a leg, Abbey becomes his chauffeur and helpmate until he recovers. When his cast is about to come off, he has to face losing Abbey. There has to be some way he can keep her from walking out of his life forever. If a job offer won’t do it, then perhaps it’s time for a proposal.

Honorable Intentions
Tessa Duggan’s family had been lifelong friends with the Stanfords; and even remained in contact with them after moving out of state. Tessa kept secrets to herself for nearly ten years. She’d loved Brand Stanford for as long as she could remember.

Having raised a son on her own, Tessa knows what it’s like to be a single parent. When Brand’s wife dies in a skiing accident, Tessa agrees to help Brand’s mother take care of his three-year-old daughter during the summer.

Is it a chance for them to start over again? Or will Brand break her heart the second time around?

Maid for Marriage
Her parents disinherited Zelina Zervos after she refused to honor their arranged marriage to a man she hadn’t seen since they were children. She is forced to find other employment—as a maid.

Drake Giannopoulos had his own reservations about marrying a virtual stranger, but his wounded ego isn’t about to let him take no for an answer.

More than Friends
The heart wants what the heart wants—it doesn’t care about family tradition, or what a person’s beliefs are. But Catherine Wall made her father a promise when she was young, and she can’t go against his dying wishes.

Jaidon has faced obstacles before, and he’s always overcome them. Catherine seems to be a dream come true. She doesn’t mind working with inner city youth and they’re both Christians. Yet, to her, dating him would be the equivalent of being unequally yoked. Can Jaidon leave his church and become a Quaker? Or are their hopes of a “happily ever after” doomed because of a promise a little girl made so very long ago?

Shadows of Doubt
Raffealle Gellermine has a very protective uncle and two protective brothers. Mathew Flannigan has a past, but for the life of her, she can’t figure out why her Uncle Rob and her brothers are trying to encourage a relationship between them. Could her brothers be right? Does she unconsciously choose the wrong type of men? Can she trust Mathew? Or will Mathew steal more than her heart?

Something about Sam
Having lost the family ranch due her parents untimely death and their past debts, Samantha Marlow is forced to look for a job for the first time in her life. Accustomed to using her nickname, Sam, she is hired as a cook, based off of her resume, site-unseen.

Jake Dampier needs someone to manage his household while he manages his ranch. He never anticipated his foreman would hire someone without interviewing them in person, especially someone as young and beautiful as Sam. The last thing he wants is a distraction—but it may turn out to be just what he needs.

Typecast Christmas
Tate Stephens, the high school principal, begrudgingly agrees to play Scrooge in the school Christmas play. Tate is irritated that Charity Fletcher, his nephew’s teacher and director of the play, chose his handicapped nephew for the part of Tiny Tim. Didn’t she find it cruel to typecast his nephew that way? Can the school play be a success, or will Tate become the Scrooge who wouldn’t change and spoils Christmas?