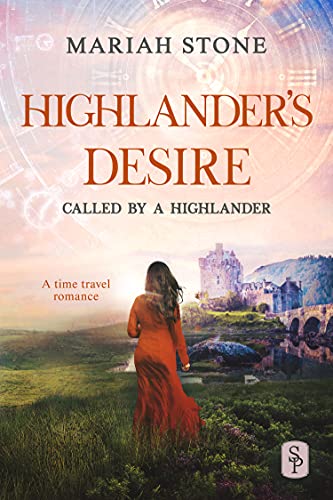 He’s a fierce Highland warrior. She’s a struggling history student. Can they transcend the bounds of time to claim the love they desire?

He’s a fierce Highland warrior. She’s a struggling history student. Can they transcend the bounds of time to claim the love they desire?

Scotland, 1310. Fiercely protective Highlander Angus Mackenzie fought for Scotland’s independence. Now, unable to pay his clan’s tribute, he has agreed to give up his own freedom by marrying the powerful and predatory Euphemia of Ross.

Scotland, 2021. Historian Rogene Wakely has felt responsible for her younger brother since their parents died. But when the teen disappears in Eilean Donan Castle, her search leads to a rune-covered rock that sends her plummeting through time. Waking up to a gorgeous Scot who makes unsavory assumptions, Rogene slaps the man and runs for her life to the local church.

Discovering that the village priest is ill, Angus asks the beautiful stranger’s forgiveness and implores her to write his marriage contract. One forbidden kiss with Rogene makes his impending wedding feel like a death sentence. But rejecting Euphemia would put Angus’s clan—and Rogene—in grave danger. Rogene can’t help being drawn to the rugged Scot, but she won’t interfere with his engagement, which will result in an important heir. But when Euphemia sees Angus’s longing for the dark-haired beauty, neither can escape her rage.

Will forbidden lovers risk their lives and Scotland’s future by choosing desire over duty?