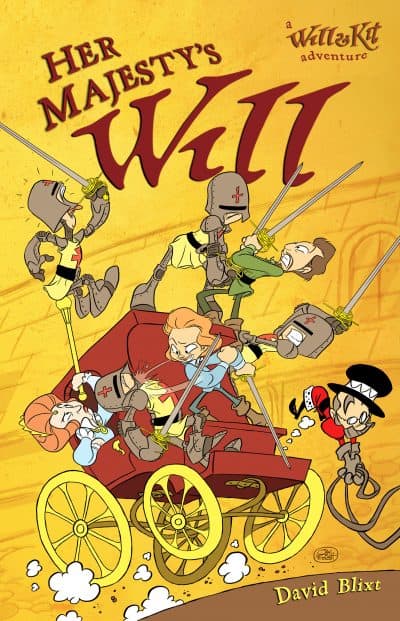 Her Majesty’s Will (Will & Kit Adventures Book 1)

Swept up in the skirts of a mysterious stranger, Will Shakespeare becomes entangled in a deadly and hilarious misadventure as he accidentally uncovers the Babington Plot: an attempt to murder Queen Elizabeth herself.

England, 1586. Swept up in the skirts of a mysterious stranger, Will Shakespeare becomes entangled in a deadly and hilarious misadventure as he accidentally uncovers the Babington Plot: an attempt to murder Queen Elizabeth herself.

Aided by the mercurial wit of Kit Marlowe, Will enters London for the first time, chased by rebels, spies, his own government, his past, and a bear. Through it all he demonstrates his loyalty and genius, proving himself to be Her Majesty’s Will.

Combining the whimsy of William Goldman’s The Princess Bride with the swashbuckling panache of Raphael Sabatini, and inspired by the Hope/Crosby Road Movies, this rollicking novel takes solace in knowing that these events surely never happened, while secretly hoping that they did.

“I loved Her Majesty’s Will, a delightful romp through Elizabethan England. When Will Shakespeare and Kit Marlowe stumble onto a plot to assassinate Queen Elizabeth, the fun is non-stop, an irresistible mix of suspense, surprises, and humor I just hope we get to see this zany team again.” —Sharon Kay Penman, The Sunne In Splendour and Lionheart

“I LOVE this book! I’m laughing and on the edge of my seat and turning the e-pages so fast, I’m gonna fry my iPad.” —C.W. Gortner, The Queen’s Vow and The Tudor Secret