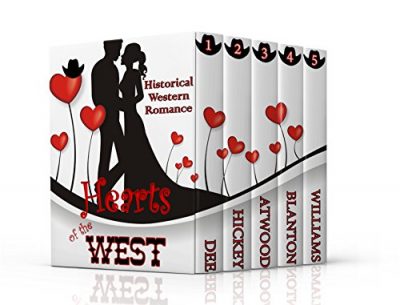 Hearts of the West

Romance heads out west in five historical romances. Over 400 reviews on the individual books!

Mail-Order Mix-Up by Tina Dee
To finance his dream of being a rancher, Henry planned to strike it rich by panning for gold. That was before Miss Josie Truett arrived at the mining camp. Will a mail-order mix-up—and a pretty blonde—spell disaster for Henry?

A simple mistake has Josie Truett wanting to make things right between the folks she works for and one of their customers. Will her trip to correct her mistake be a journey to her dreams, or is she making another mistake with Henry?

A Touch of Sugar by Cynthia Hickey
Maureen O’Shea arrives in Devil Falls, Montana, to marry a man she’s never met. When she finds out her intended had died before her arrival, she is met with an uncertain future. She decides to spend the last of her funds by bringing culture to the western town in the form of a tea shop. It never occurred to her that the town preferred coffee. Not until the handsome blacksmith, Micah Webster so rudely points it out.

Stagecoaches enroute to the town are being robbed and Micah is deputized to help. When Maureen’s life is in danger, he realizes the fashionable Irish lass has gripped his heart in her lace-gloved hand and things will never be the same.

Can these two make their uncertain futures become one?

Ultimatum Bride by Leah Atwood
“I’m giving you two months to settle down. Find yourself a respectable wife, stop the brawling, and be the man I know you can be. Otherwise, I will tell Darrel to expect a wedding for his daughter.”

“And if I refuse to marry Elsie?”

George West’s eyes narrowed into tiny slits. “Then you will be written out of my will.”

Jesse West is faced with an ultimatum. Unwilling to marry Elsie and steadfast against losing his right to inherit the Circle W, he must think quickly. His best option seems to be sending away for a mail-order bride.

Faith Donovan vowed never to marry. Years of witnessing her parents’ abusive marriage soured her against such a union, but when she can’t find employment, she answers an advertisement for a mail-order bride and hopes for the best. When she discovers her new husband has a reputation for the very things she feared, her hopes are crushed.

Hearts in Defiance by Heather Blanton
Men make mistakes. God will forgive them. Will their women?

Charles McIntyre built the lawless, godless mining town of Defiance practically with his bare hands . . . and without any remorse for the lives he destroyed along the way. Then a glimpse of true love, both earthly and heavenly, changed him. The question is, how much?

Naomi Miller is a beautiful, decent woman. She says she loves McIntyre, that God does, too, and the past is behind them now. But McIntyre struggles to believe he’s worth saving . . . worth loving. Unfortunately, the temptations in Defiance only reinforce his doubts.

Free to Serve by Susette Williams
Sawyer Stephenson struggled with his faith in the past. Angry with God for not providing for the people in his small town, he chose to steal from the rich to help those in need. Sentenced to jail time, the pastor who strayed from the path realizes that God may be giving him a second chance when he is offered the opportunity to participate in a program that seems almost too good to be true.

Gabriella Emerson is tired of being looked down on by other women. If she had to choose, she would have never chosen the life of a saloon girl—but desperation had a way of making you do things you’d later regret. After inheriting a daughter from one of the other barmaid’s she worked with, Gabriella is determined to start fresh, so that the child will not be doomed to follow down the same path. Gabriella moves to Mucksbe, Texas, and signs up to become a Freedom Bride in order to provide for her young charge.

Can two very different people find a second chance, or are they doomed to be defined as saint and sinner?